In the winter of 2011, divers working on Budapest’s Margaret Bridge discovered the bullet-scarred skeletal remains of at least 20 people, almost certainly Jews executed by Hungarian fascists during World War II. Reading the news on her BlackBerry, U.S Ambassador Eleni Kounalakis expected an outpouring of horror and regret, or at least curiosity.

Instead, the story passed with little notice. “There were no follow-up announcements by the police, no memorial services,” she recalls. Jewish leaders never learned what happened to the remains. “The problem in Hungary, I realized, wasn’t just the rise of anti-Semitic, neofascist voices and acts. Hungarian society at large was responding to those radical voices with disproportionate silence and apathy.”

As U.S. ambassador to Hungary from January 2010 to July 2013, Kounalakis had a front-row seat for the implosion of what was once the most promising new democracy in the former Soviet bloc. Neo-fascists were elected to parliament. Prime Minister Viktor Orban presided over a rewriting of the constitution and the passage of hundreds of laws eroding the independence of the judiciary, the civil service and the media. Anti-Semitism was on the rise, and much of the young would-be professional class had started fleeing to Western Europe in droves. 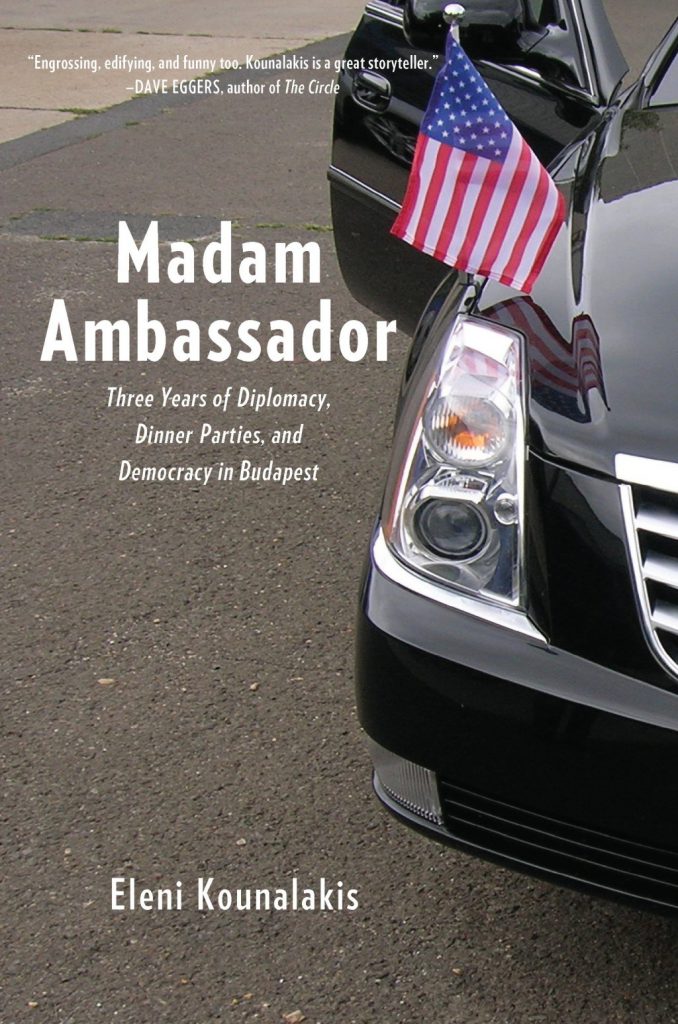 In her memoir, “Madam Ambassador,” Kounalakis recounts Hungary’s slide into what Orban himself has described as an “illiberal democracy” inspired by Vladimir Putin’s Russia. To her credit, it’s a far more forthcoming book — personally and analytically — than one would expect from a diplomat, and it offers further evidence, if anyone still needs it, that the European Union now faces the possibility of an autocracy taking shape within its borders.

Like most of her post-1989 predecessors, Kounalakis was a political appointee and one with no prior knowledge of Hungary. Just months before taking her post, she thought she was going to Singapore, and she wept with disappointment when the White House changed its mind. A Sacramento property developer who supported Hillary Clinton in 2008, she set out on a path to an ambassadorship that passed through the hands of a close friend, then-House Speaker Nancy Pelosi, and was facilitated by Kounalakis’s acumen as a major political fundraiser for California Democrats and, eventually, Barack Obama.

Clearly, Kounalakis was a quick study, bringing a politically savvy businesswoman’s instincts for negotiation and the reading of power dynamics. The Greek-speaking child of self-made immigrant parents, she was no alien in the history-saturated worldview of the Eastern half of Europe. Her husband, journalist Markos Kounalakis, covered the collapse of communism in Budapest, and the two were married by the ecumenical partiarch of Constantinople at his Istanbul patriarchate, which is about as Old World as one gets. Hungary experts reading “Madam Ambassador” will be quickly reassured: This is one political appointee who was in no way over her head.

The ambassador admits to missteps. The book opens with a high-stakes boar hunt early in her tenure, deep in the countryside. The petite diplomat shocks the Hungarian military men who make up her party by making the only kill on the trip, but the evening ends with them ceremonially spanking her bottom with a wooden switch as she kneels over her kill. A tradition, they say, but one that feels humiliating to her. She kept the switch on her office wall as a reminder not to let local customs trump the dignity of her position. She must have impressed someone, because months later she was traveling to remote Afghan bases with the Hungarian defense minister; she helped persuade him to keep his country’s troops deployed alongside ours in a dangerous location.

Orban, whose Fidesz party captured a supermajority in the Hungarian parliament shortly after Kounalakis’s arrival, is a quietly menacing presence throughout her tenure. In their first face-to-face meeting, he begins ranting about the “Bolshevik billionaires” who “stole everything,” which is rich coming from a man who over the next two years would award $1.3 billion in largely single-bid construction contracts to Közgép, a company controlled by his college roommate. “International companies located in Hungary that ordinarily would have bid for projects told us it was no longer worth the time and money required to submit proposals, because Közgép was sure to win,” Kounalakis writes.

Months later, Orban began pushing through a new constitution, one written behind closed doors and without public input or participation. Hundreds of laws followed, effectively gutting the freedom of the media and courts and concentrating power in Orban’s office. “Freedom, to Viktor Orbán, did not mean personal liberty within the rule of law, as it did to the ancient Greeks and it does to Americans,” Kounalakis realized near the end of her tenure. “To Orbán, Hungarian freedom meant freedom from the influence of anyone who wasn’t Hungarian.”

Yet the international response to Orban’s “Two-Thirds Revolution” was muted at first. For months, the European Union said nothing as one of its members disassociated itself from Western liberalism. Then-U.S. Attorney General Eric Holder, meeting Orban during a 2011 visit, took it on himself not to raise constitutional concerns after being spun by a sweet-talking deputy. “I felt the meeting was going great,” Holder told the astonished Kounalakis after the meeting. “He said all the right things, and we agreed on everything.”

It took the release of an ax murderer to raise alarms in Washington. In late August 2012, Orban suddenly repatriated Ramil Safarov, an Azeri serving a life term in Hungary for hacking an Armenian soldier to death during a NATO-sponsored training program. To nobody’s surprise, Safarov received a hero’s welcome in Azerbaijan and was immediately pardoned, promoted and given a new apartment. Armenia cut off diplomatic ties with Hungary, and tensions escalated in Nagorno-Karabakh, over which Armenia and Azerbaijan had fought a war in the early 1990s.

“Don’t they realize that their little trick could cause a war?” Deputy Assistant Secretary of State Marie Yovanovitch asked Kounalakis on the telephone. “Who will clean it up — Hungarians? No, Hungarians won’t clean up the mess. We will! We will be the ones left to fix it!”

That little trick, Kounalakis says, ended Hungary’s two-decade status as a reliable strategic partner of the United States. And as she prepared to return home, the ambassador realized the sad truth of the domestic situation as well. Hungarians “thought they were getting a New Deal,” but instead they were getting “the Old Deal, with government having too much control over the people of Hungary all over again.”