LA Times: “Eleni Kounalakis can carve out a meaningful role as lieutenant governor” 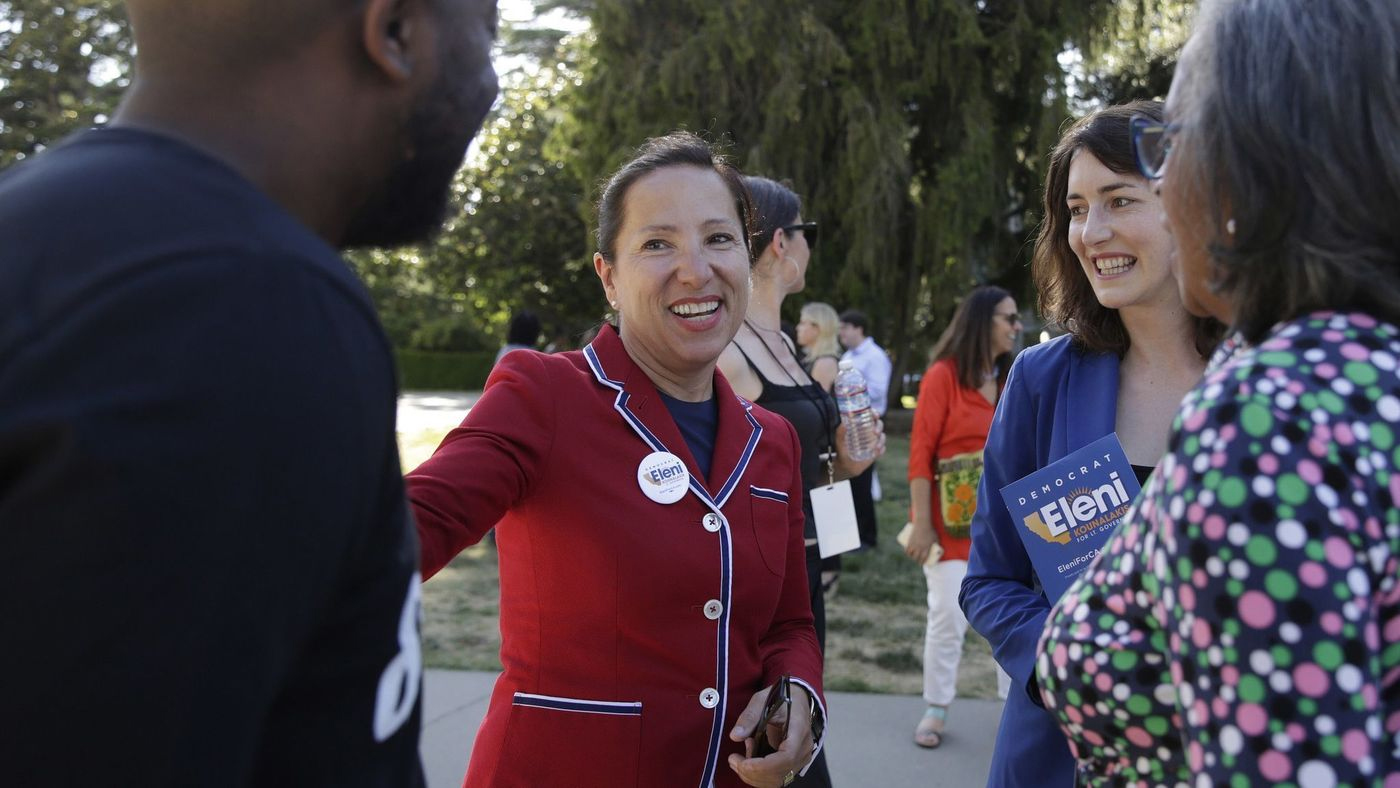 Eleni Kounalakis, center, now California’s lieutenant governor-elect, talks with attendees at the Power to the Polls rally at the Capitol on June 1 in Sacramento. (Rich Pedroncelli / Associated Press)

A Greek family is forced to share its modest home with enemy Nazi soldiers for three years during World War II.

After peace returns, the family’s teenage son bolts to America by himself.

He works as a farmhand — does any kind of job he can find — and eventually becomes a very rich land developer.

His daughter grows up to be California’s first elected female lieutenant governor.

“I learned from my father that being involved in the democratic system was an incredible privilege,” says Lt. Gov.-elect Eleni Kounalakis. “People in Greece couldn’t be involved in their own government if they were just villagers.”

Kounalakis’ dad, Angelo Tsakopoulos, was 5 when enemy paratroopers stormed the small mountain village where his family lived in 1941.

Six Nazi soldiers took over the family’s second floor. The parents and six kids were restricted to three downstairs rooms. “We slept on the floor,” Tsakopoulos says.

Germans occupied the region to beat back Greek guerrilla resistance. Tsakopoulos’ father was a resister. “Most of all the village males were,” he says. “There was a lot of fear.”

He remembers that a German patrol once went into a tiny village nearby to quash resistance activity.

“A villager shot one of the Germans,” Tsakopoulos says. “The Germans captured 18 males and hung them. They were going to do the same in our village, but a local doctor who had studied in Germany talked them out of it.”

When the occupation started, there was a sunset-to-sunrise curfew. Anyone out at night “would be shot on sight,” he says. Later, people were restricted to only two hours outside — noon to 2 p.m.

Finally, the Allies invaded Italy and France in 1944 and the Germans retreated. Tsakopoulos was 8.

“Those were happy days,” he says.

That kind of traumatic childhood is almost unfathomable to a U.S.-born kid. How did it affect him?

“Eventually you become philosophical,” he says. “You read history. Understand life and war, the importance of mortality. The misery we cause each other. It wasn’t just that war. Afterwards, we had a civil war as bloody as the second world war. War is horrible.”

He heard people talking about America. “Relatives wrote letters about how America was paradise — the place where there was no hunger.”

At 14, Tsakopoulos talked his parents into allowing him to leave by himself. He had an uncle in Lodi, near Sacramento. He traveled on a steamship and arrived in New York Harbor in 1951 on his 15th birthday, sailing past the Statue of Liberty.

“Everyone went outside and people were crying louder and louder and I said: ‘Why in the world are they crying? We’re here,’” Tsakopoulos says. “I didn’t understand the story about the gift from the French…. We could see the city and skyscrapers and all that. It was very, very exciting. It was beautiful.”

In Lodi, he lived in a detached garage on a farm. He sold melons on the street. “They called him ‘the melon boy,’” Kounalakis says. He attended Sacramento State College, as it then was called, working as a waiter.

“He used to cater at the governor’s mansion when [Gov.] Pat Brown was there,” Kounalakis says. “One night Jerry [Brown] was home, upstairs studying for the bar exam.”

Tsakopoulos became a real estate agent, then a land developer and eventually fabulously wealthy. He has donated generously — tens of millions of dollars — to Democratic candidates, including his daughter. “Of course I wanted to help my kid.”

Why give to politicians? “Greek culture is to get involved in your community,” he says.

But for Tsakopoulos and his daughter, the culture has extended far beyond the local community to White House candidates, including Bill and Hillary Clinton. The family’s money and Kounalakis’ grunt work for Clinton campaigns landed her a U.S. ambassadorship to Hungary when Hillary Clinton became secretary of State.

Father and daughter poured nearly $13 million into her lieutenant governor’s race. But she resents anyone saying “daddy’s money” bought her the office.

Kounalakis says she had a hard-working, smart campaign. She met with voters in all 58 California counties. Near the end, 350 volunteers texted more than 1 million women, pointing out that she was endorsed by former President Obama and Sen. Kamala Harris (D-Calif.).

She’ll have little power as lieutenant governor. But she’ll sit on the UC Board of Regents, the Cal State board of trustees and the State Lands Commission, which regulates coastal waters. In her texts and TV ads, she promised never to vote for a tuition hike, to protect the environment and strive for a better working economy. She’s a former president of her father’s development company.

She has paid political dues — as a staffer for the state Democratic Party, working on three presidential campaigns and serving as delegate to five national conventions. “You can’t be much more of a party activist than I am.”

Kounalakis has the feistiness and energy to carve out a meaningful role as lieutenant governor, if anyone can. It’s in her genes.

I wonder how many other potential achievers of the American Dream are now being blocked from entering the country.