‘This is very personal to me’: Eleni Kounalakis pushes education at inauguration 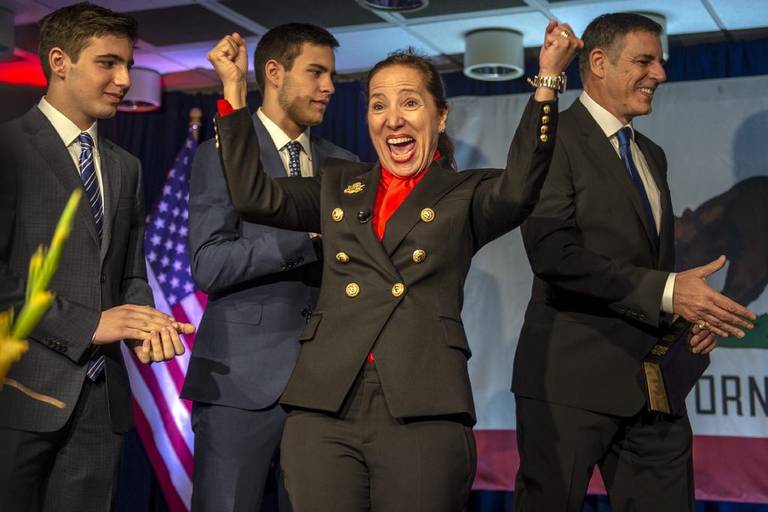 Eleni Kounalakis, 52, celebrates after being sworn in as lieutenant governor with her sons from left Eon, Neo and husband Markos behind her at the Tsakopoulos Library Galleria on Monday, Jan. 7, 2019 in Sacramento. Photo by Renee C. Byer

There is no issue more important than education, Eleni Kounalakis told the crowd as she was sworn into office as lieutenant governor Monday.

Her grandmother, Katerina, never learned how to read or write. Her father, Angelo Tsakopoulos, came to the United States from Greece at 14 years old. He had little money and no English-speaking skill,s but went on to become a prominent and wealthy Sacramento real estate developer.

“The path to wisdom is through education,” Kounalakis said. “This is very personal to me.”

Kounalakis worked as ambassador to Hungary under President Barack Obama when she decided last year to run for California’s second highest office. With lots of financial backing, including $4.8 million in contributions from her father through an independent expenditure committee, she is now the first woman elected to serve as California’s lieutenant governor.

Pelosi praised the voters for electing Kounalakis, calling her a “champion of children” and saying Kounalakis’s success is “the story of the American dream.”

Newsom referenced past quibbles he had with former Gov. Jerry Brown when he served as lieutenant governor. Newsom said he hopes his relationship with Kounalakis will prompt a different dynamic between the two offices.

“Don’t start appointing judges in my absence,” he joked.

When Newsom leaves the state during his governorship, Kounalakis will temporarily fill in to lead the state, though there is generally an informal agreement for the lieutenant governor to hold off on taking major actions.
Among the more notable moments of the afternoon, Kounalakis reaffirmed her opposition to offshore oil drilling.

“There are two primary things Athena represented in ancient mythology: One is strength, and the other is wisdom,” Kounalakis said. “As she looks out towards the Pacific, she’s poised to defend our pristine shores. You can almost hear her say, ‘No new offshore drilling!’ Right?”

View Lt. Governor Kounalakis’ speech at the inauguration on January 7, 2019.