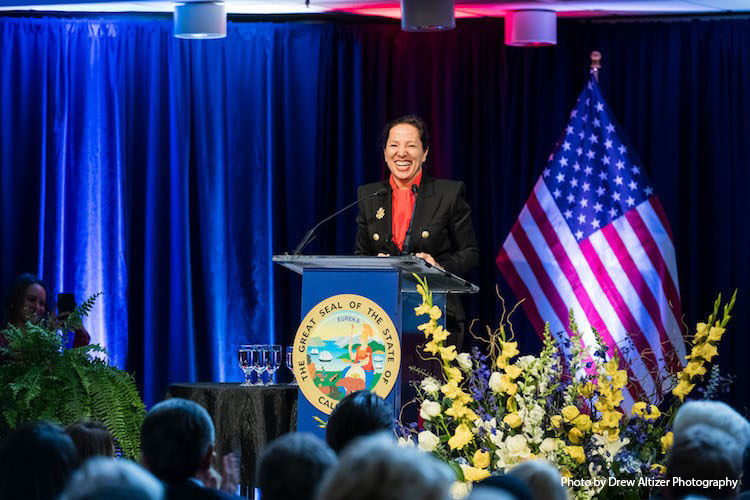 Lt. Governor Kounalakis speaking at her inauguration on January 8, 2019

Governor Newsom and first partner Jennifer Siebel Newsom. We are so honored by your presence here on the day you have taken the helm of our great State of California.  As you noted in your inaugural address there is division in the country, but here in CA we have unity.

Not since the Gold Rush of 1849 has this golden state played a more pivotal role on the world’s stage.

Thank you for the bold and brave leadership I know you will deliver to all Californians.

Speaker Pelosi, thank you for decades of mentorship – but most importantly, for setting an example of leadership for every one of us. Democracy, as we’ve often discussed, is always a work in progress. How fortunate to have you – the first and second Californian ever to serve as Speaker of the House – back in Washington to remind the country, and the world, that California’s values are what underpin our vibrant economy.

What an honor to have this room filled to the rafters with friends and family. Thank you to all the text-bankers, precinct walkers, informal advisors, social media mavens, and everyone on TeamEleni who put your name behind our campaign for a better, stronger California. Today, is truly for you.

Emblazoned on the Great Seal of the State of California is a Greek goddess in Roman form – Romans called her Minerva but she’s more famously known from Greek mythology as Athena.

She is there, on your program, in full battle dress: Armed with shield and spear, breastplate and helmet. She is ready for the fight but sitting in repose. She looks out towards a calm bay teeming with full-sail ships. Beyond these ships, she looks with hopeful anticipation towards this state’s glorious bounty and future.

She sees the majestic, breathtaking, natural beauty of California.

There are two primary things Athena represented in ancient mythology: One is strength, and the other is wisdom.

As she looks out towards the Pacific, she’s poised to defend our pristine shores. You can almost hear her say “No new offshore drilling!” Right?!

As your Lieutenant Governor, and incoming Chair of the State Lands Commission, it’s now my job to join her in the fight to protect our environment and keep our unique and world-renowned beaches healthy, flourishing and clean.

And as to wisdom, I’d like to say something about that too.

And this is very personal to me. Many of you have heard me tell the story of my grandmother Katerina. My grandmother never learned to read or write. I often imagine how hard it must have been for her to let my father leave the village, at just 14 years old, to travel to America.

He was alone, had little money and spoke no English. After a long journey, he landed in Lodi, not far from here, where he went to school and worked in the fields as a farmworker.

Life was hard. But to him, Lodi was paradise. Unlike his homeland, where Nazi soldiers had taken residence in part of our family’s village home, here there was no war. There was no fear. And unlike the rocky soils of Greece, California soil was – as he often said – like soft cake, that didn’t require picking out the stones one by one, before planting crops.

People he met were generous and kind, and he worked his way to Sacramento State College. Tuition at that time was $62 a semester. He was able to pay his way through while working as a waiter – sometimes as part of the catering staff in the Governor’s mansion.

Think about that. $62 a semester. One job. No loans. How else could he have gone from the fields to the classroom? When California’s Master Plan for Higher Education was written, our leaders knew that there is NO GREATER INVESTMENT in the future of our state than education.

When we throw open the doors of higher education to anyone in this state who seeks its benefits, talent will find its way.

As your Lieutenant Governor and in my role as a UC Regent and CSU Trustee, I am committed to expanding access to affordable public higher education here in our state. It’s wise, its smart and it is the best way to address our rapidly changing digital economy.

Our economy is now the fifth largest in the world. And in business and in government, here’s what I’ve learned: Education – Economy. They’re closely connected. For every dollar of public funds we invest in higher education, we get $4.50 back in increased tax revenue, and decreased cost of services.

As a business woman – I’d take that deal all day long.

Our 114 community colleges, 23 Cal State Universities and 10 U.C.  campuses, including five hospitals and three research institutes, together make-up the most powerful system of higher education in the world.

We have so much to be proud of.

And so much work to do so more students can attend a two or four-year college. So they can pursue their passions, or train for a good paying job, without bankrupting their families or amassing crippling debt.

As you’ve heard, I traveled across California, visiting all of our 58 counties and I heard a lot of stories. In Stockton, I heard a about two-year long wait list for a welding class at a community college, and young men waiting eagerly to get in.

A grandmother in Mariposa, told me with tears in her eyes about her grandson. He was living in his car while going to a UC, but would not quit until he got his degree.

And we all heard the staggering statistic that last year 32,000 students, who qualified to be admitted into the CSU system, were turned away because there was no room.

We have so much talent.

And as the world seeks solutions to its most pressing issues – climate change, poverty, transportation, homelessness, cyber-security – we must invest in our institutions, so they can produce more engineers, scientists and innovators – and avail them to global opportunities that leverage their ingenuity and creativity for the benefit of our state and world.

During my tenure as a United States Ambassador, I had a window into how the rest of the world views us.

We are a global community that inspires people everywhere. Students want to study here, innovators want to work here, and even as we confront our many challenges, world leaders flock to our state to try to understand the magic.

The best version of America is California.

So let us continue to use the wisdom and strength of Athena to confront our challenges, her shield to protect and defend our values, and her spear to point our way toward a better, strong California.

Markos, Neo, and Eon, I love you guys.

And I love this state.

Thank you all for your trust and your support.