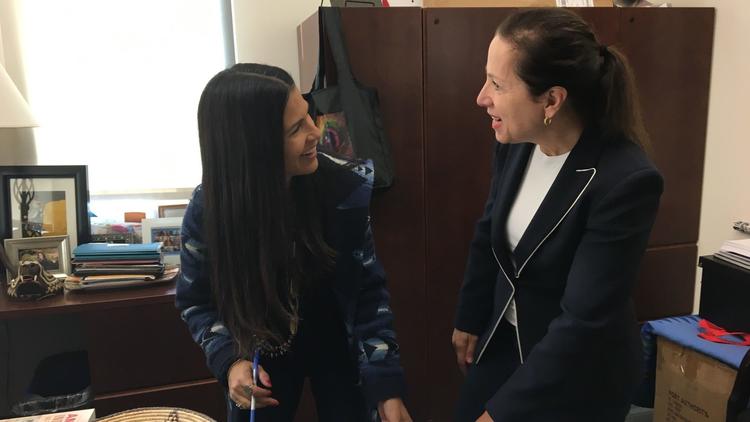 The trip, which also included a stop at San Diego State University Friday afternoon, was part of her plan to learn about the campuses she’ll represent as a member of their governing bodies. The lieutenant governor serves on both the University of California Board of Regents, and the California State University Board of Trustees.

“I’m starting my time on these bodies with the ability to go to campuses directly to hear from stakeholders,” she said.

At Cal State San Marcos, Kounalakis met with administrators, talked to students and learned about some of the university’s specialized programs and services. That included the ACE Scholars Services, which supports former foster youth on the campus, helping them navigate college life.

Guiding her around the campus, student Kenny Tran described other amenities of Cal State San Marcos, from a student surf club to a 24-hour library study center.

“We’re trying to find those key things on campuses that are unique and really stand out,” Kounalakis said.

She also stopped by the Pride Center, which serves students who identify with all genders and sexualities.

On her way there, she encountered Professor Joely Proudfit, chair of American Indian Studies and director of the California Indian Culture and Sovereignty Center at Cal State San Marcos.

“We have the largest Native American population per capita,” Proudfit told the lieutenant governor.

Intrigued, Kounalakis made a quick detour to view the center, where she and Proudfit discussed the needs and opportunities of Native American students.

Gov. Newsom’s proposed 2019-20 budget includes $36.4 billion for higher education, a $1.43 billion increase over the previous year. Among the issues Kounalakis wants to tackle are student life, and the cost of living on campus.