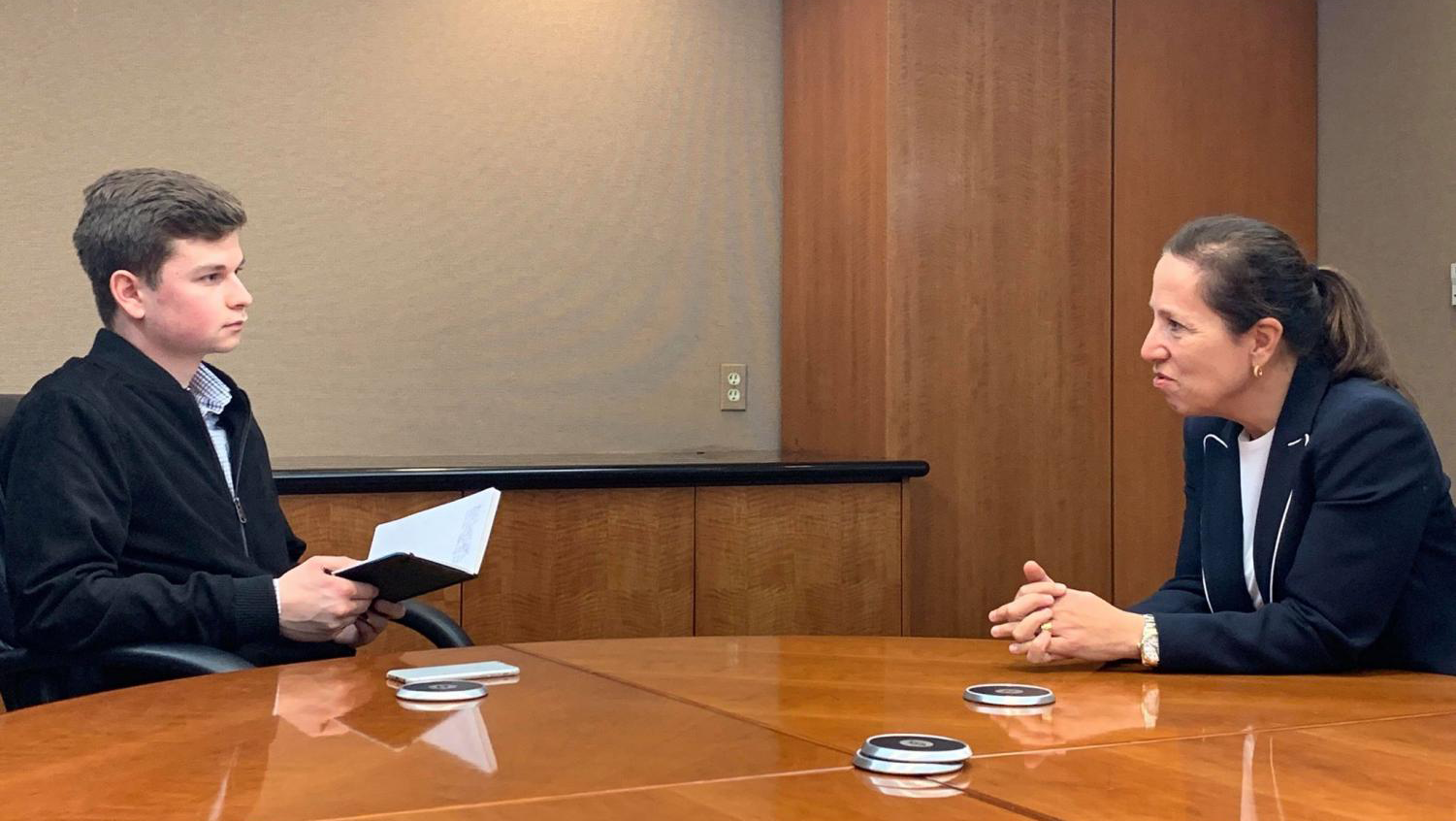 Lt. Gov. Eleni Kounalakis made her first official visit to San Diego State on Feb. 1 as part of her statewide “listening tour.” The visit marked the beginning of a dialogue between her office and public universities across the state.

Kounalakis, the first female lieutenant governor in California history, embarked on her listening tour after her Jan. 7 inauguration. As lieutenant governor, she will sit on the CSU Board of Trustees and UC Board of Regents. Kounalakis said the discussions held on campuses would play a significant role in fostering a strong relationship.

“The best way to learn is to talk to people and listen firsthand,” she said.

Kounalakis cited Gov. Newsom’s tenure as lieutenant governor as a key component of building trust between the administration and higher education.

“We now have a governor who sat on (university) boards for eight years,” she said. “He has clearly demonstrated a very strong faith with the investment of state dollars into the CSU system and what it would do for our state, both in educating more students and creating more opportunity, while also meeting the needs of the workforce of the future.”

Newsom recently proposed the single largest annual increase in financial support for the CSU system. Kounalakis declared her support for the governor’s budget and acknowledged the importance of keeping tuition down while increasing the availability of grants and scholarships.

“I think it is critically important that public higher education be as accessible as possible,” Kounalakis said.

She also underscored the pressing need for increasing capacity to accommodate demand. “Our system is bursting at the seems,” she said. “Tens of thousands of students last year who were qualified for admittance to the CSU system simply had no place.”

Kounalakis further stressed the need for additional funding for higher education in the future. “I hope to look at different opportunities to increase funding into the system and to help support the innovative work being done on these campuses,” she said.

Kounalakis witnessed the power of education in her own family. Her father, an immigrant to the United States who started as a farmworker, attended Sacramento State before starting his own business.

“I’ve walked the pathway of the American dream,” Kounalakis said. “I know very well that it goes, for millions of families, through the halls of our colleges and universities.”

Kounalakis previously worked in the private sector for her family’s housing and development firm. She hopes to rely on her housing experience to address the urgent need for more affordable homes statewide.

“After the recession, housing production collapsed,” she said. “We lost expertise and trained workers who knew how to build housing. The need for more housing continued to go up while the delivery mechanism has not really recovered.”

Today, California produces half of the housing it once built before the recession to keep pace with a growing population.

Paired with the catastrophic wildfires that have destroyed tens of thousands of homes, Kounalakis said she is pushing for the construction of new housing, including affordable homes and campus housing.

Before entering politics, Kounalakis served as ambassador to Hungary during the Obama administration. She cited the 2016 election as a key factor in her decision to run for public office. After working for the Clinton campaign, Kounalakis said she responded to Clinton’s call for anyone with something to offer – particularly women – to run for office. Inspired by her background in diplomacy, she also advised SDSU students to take advantage of living in a border city.

“Go abroad, even if it is a day trip across the border,” she said. “Students have a window into a much bigger world which opens the mind and opens opportunities.”