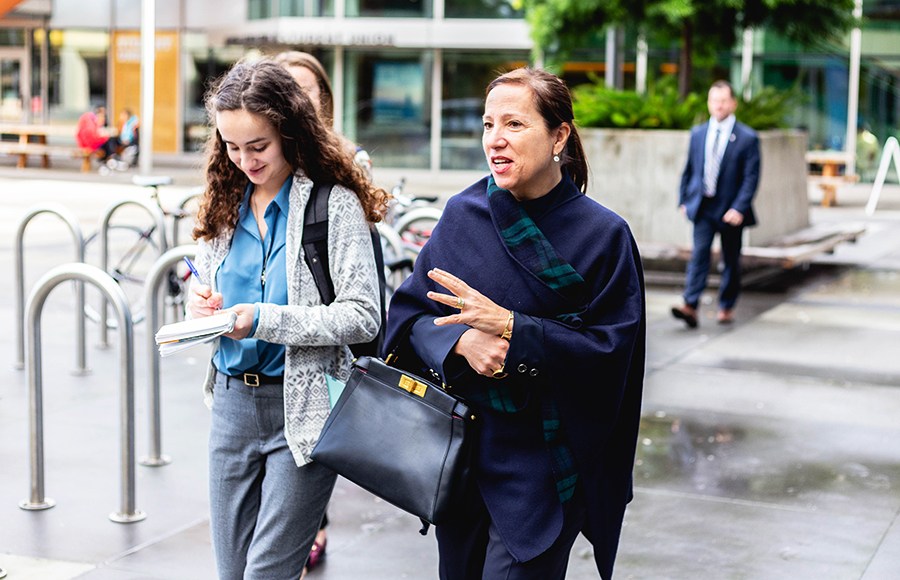 Kounalakis, who received her MBA from the UC Berkeley Haas School of Business in 1992, was already somewhat familiar with the campus but toured some of the newer additions, including Eshleman Hall, the renovated Martin Luther King Jr. Student Union, Blackwell Hall and SkyDeck, UC Berkeley’s business startup program.

Kounalakis said the campus has the same “vibe” as when she was a student there 27 years ago.

“I felt the inclusiveness on all of Berkeley’s campus,” she said. “It truly was such an incredible, welcoming environment. I had the wonderful feeling that I belonged here.”

As lieutenant governor, Kounalakis now sits on the UC Board of Regents as well as the CSU Board of Trustees. She embarked on her listening tour to hear about the strengths and weaknesses of the public higher education system in California from students and faculty members themselves.

“I believe the meeting was extremely productive and I am very excited to continue working with the (Lieutenant) Governor to find solutions to the most pressing issues our students face today,” Khalfay said in an email. “Specifically, I hope she will fight any tuition hikes proposed regarding resident or non resident students.”

After the meeting, Kounalakis visited the campus LEAD Center and Public Service Center in Eshleman Hall.

She also toured the newly built Blackwell Hall. As lieutenant governor and a UC regent, Kounalakis said she recognizes that housing is a critical issue, especially because of the high costs and increased numbers of students sleeping in their cars.

“We need to add more beds for more students at a better rate,” Kounalakis said. “We need to build more Blackwell Halls.”

She also addressed issues with deteriorating facilities, acknowledging that “not all are as beautiful as Blackwell Hall.”

Overall, Kounalakis said her visit “deepened her understanding for the campus” and the student perspective. She plans to use her position as lieutenant governor to focus on environmental protections and public higher education.

Kounalakis added that she is grateful to the campus for giving her “a sense of community” and instilling a “sense of service” within her. She hopes to further this idea of belonging throughout the entire UC system.

“It always troubles me to hear that there are still students who feel that they don’t belong because the whole idea of the UC system is that anyone with the academic capability — this system is for you,” Kounalakis said. “That doesn’t mean that everything is going to be easy. It just means that there’s faith that you belong here and that you can make it.”