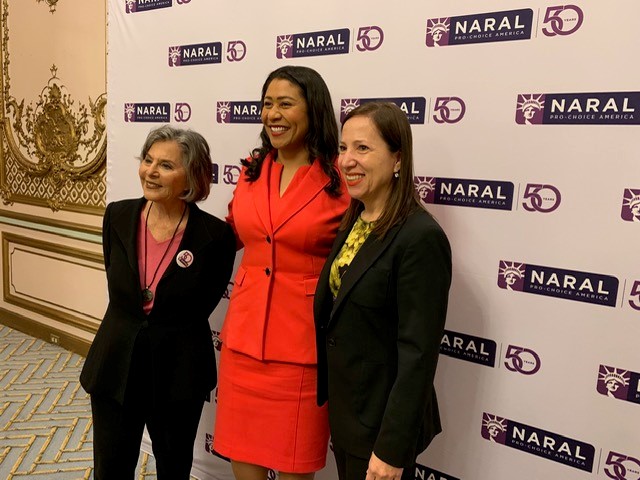 In 1792, Mary Wollstonecraft published her seminal work titled “The Vindication of the Rights of Women.” Although she only lived to be 38 years old, she is considered by many to be the Mother of Feminism.

My favorite quote of Mary Wollstonecraft’s is this: She said “I do not wish for women to have power over men. Just over themselves.”

Today, over two hundred years later, we know that there is no greater power that women can have over ourselves, then having control over our reproductive choices.

And NARAL knows that the best way to assure control over our choices is for women to have equal representation in the halls of power within our democracy.

Two years ago, in March of 2017, I was here at this lunch, as I had been many times, and my head was swimming with the idea that I might run for office. Driven by a combination of despair over the 2016 election results, and adrenaline to do something about it, I was inspired by the women in this very room – Elise, Nonie, Amy, Dagmar – I was inspired not to back down.

I just kept thinking, if not us, who? If not now, when?

Of course, I wasn’t the only one feeling this sentiment. 2018 saw a massive surge of women running and winning all over the country. Voters – women and men – were more compelled than ever before to find the women on the ballot and vote for them. But even with political wind at our backs, any successful campaign requires a strong network of support.

NARAL was a critical part of that network for me and for many other candidates in 2018. I am quite sure that I’m standing here today because NARAL endorsed my candidacy very early. While other groups stood on the sidelines to see who would emerge, NARAL invested. The endorsement came with funding, a powerful, positive brand and an army of volunteers who helped us send text messages to 1 million California women.

And I want to recognize that this decision was bold. It took courage, I had never run for office before, and my chief opponent was a sitting state senator who was chairman of the Senate Health Committee.

But you did it, we won, and now, I am so proud to be your undaunted, unwavering, NARAL pro-choice champion. I’m also proud to be the first woman ever elected Lieutenant Governor of California.

Together, we will continue to fight for women’s reproductive freedom by ensuring NARAL’s smart, effective policies are adopted in Sacramento – starting with Senate Bill 24.

SB24 was just reintroduced in the California legislature by Senator Connie Leyva. The bill is sponsored by NARAL and is titled the College Student Right to Access Act.

If adopted, it will require public California universities to offer the abortion pill at campus health centers. As a member of the UC Regents and the CSU Board of Trustees, I can tell you that this is sound policy that will benefit young women and ensure that students are able to exercise their right to control their bodies and make health choices for themselves.

My friends, if you are feeling troubled, and many of us are, about the direction of our country right now – take comfort in knowing you are not alone. PPIC just released a poll showing that only 30 percent of Californians think the country is going in the right direction. But here’s the good news. In the same poll, 55 percent of Californians believe our state is going in the right direction.

California values, values of inclusiveness, commitment to education, investment in innovation and reproductive freedom – our California values will light the way forward and help us build a better state, and a better country for our daughters, our sons and all of our children.

Thank you NARAL and thank you to everyone for being here today!