Greek Independence Day at the Capitol 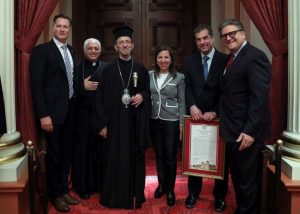 Greek Independence Day happens to fall within Women’s History Month. So I would like to take this opportunity to remember the Greek naval commander and heroine of the Greek War of Independence, Laskaria Bouboulina.

At the age of 40, on the island of Spetses, Bouboulina became a widow and inherited her husband’s fortune and his trading business. She committed that fortune to the cause of independence, converted her trading ships to warships and built one of the Greece’s largest warships – the Agamemnon, right under the noses of Ottoman officials. When the revolution broke out, she herself commanded the Agamemnon into battle.

They say that Bouboulina was the first woman in history ever to hold the title of Admiral. And her name, for Greeks and Greek Americans alike, is the term used for a woman of courage, conviction and determination. I will admit, my grandfather called me a Bouboulina when I was a girl, and I always strove to live up to the name.

Thank you Senator Borgeas, for bringing us together to remember and celebrate Greek Independence, the shared values between California and the Hellenic Republic, and the importance of Greek history to Greek Americans, and to the world.