One Belt One Road Subnational Forum 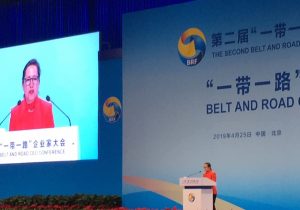 Lt. Governor Kounalakis speaking at the Belt and road CEO Conference in China

It is an honor to be here in Beijing for the One Belt, One Road conference, representing California, the westernmost part of the continental United States, with a 1000-kilometer shoreline on the Pacific Ocean. I am honored to be here on behalf of the people of California, and our state’s governor, Gavin Newsom.

We are also home to the largest system of public universities anywhere in the world. The University of California and the California State University together have 33 campuses and over 750,000 students. Our community college system has an enrollment of over two million students.

Education is important to us in California – and countries around the world participate in our success by sending thousands of international students to our state to study side-by-side with our own American students. In fact, at this moment, 9 percent of the students studying in our University of California system are from China. That is nearly one in ten of our students at UC Berkeley, UCLA, UC San Diego, UC Davis, UC San Francisco and the all the other UC campuses combined.

This robust educational exchange fosters the sharing of culture and ideas – and builds personal relationships which go on to be the basis of mutual understanding, international cooperation and economic innovation.

Opening our minds, opening our hearts, is a fundamental ideal for Californians. We are the home of the beat poets, we invented blue jeans, skateboarding and popsicles. It is well known that in the United States, we believe that personal liberty – freedom – drives innovation, which in turn drives economic development.

No part of my country exemplifies the connection between freedom and economic development more than California. It is why our state attracts not just students from around the world, but anyone seeking to work hard, play by the rules and build a better life for themselves and their families.

I myself am the daughter of a Greek immigrant. My father came to California as a refugee after the Second World War. He came alone, with no money and no English, and moved to the vast, fertile Central Valley, where he worked in the fields, as a farmworker, picking fruit. He also went to school and because of our system of public universities, he was able to go to college and get an education.

My story is not uncommon in California. In fact, 27 percent of the residents of our state were born outside of the United States. That is more than one in four of our population of 40 million people who are immigrants from another country – Europe, Central and South America, India, Asia, everywhere. If you haven’t been to California, please come! And you will see walking down the street a rainbow of people from around the world. We attract the best and the brightest – the most ambitious and hardest working – those who dream of breathing the sweet air of acceptance and freedom.

We know that our diversity is our strength. We also know that it creates special challenges for us. For instance, there are at least 59 languages spoken in our elementary schools. And the U.S. federal government grappling with difficult immigration issues. But in California we do not hide from challenges – we meet them head on.

PART II: CALIFORNIA IS ADDRESSING CLIMATE CHANGE AND BRI SHOULD TOO

One of the greatest challenges we in California have taken it upon ourselves to address is that of climate change – and global warming.

If you have seen California in the news these last two years you have seen our state experiencing historic catastrophic wildfires. Governor Newsom’s top priority is preventing and preparing for these fires – fires that have traveled at the speed of one football field per second and have formed fire tornados – things we have never seen before. We know the catastrophic wild fires are just one manifestation of a rapidly changing climate.

The reason I came to Beijing to participate in the One Belt, One Road conference is primarily to speak about climate change, and urge participants to prioritize this issue, and consider how the Belt and Road Initiative can drive positive action around this global threat.

California’s previous governors – Arnold Schwarzenegger and Jerry Brown – our current Governor Gavin Newsom, myself, and the vast majority of the people of California all agree: Climate change is a serious, existential threat to the security and stability of our country and the world. We have two choices: we act, or we cope. As the impact of climate change is already being felt with rising tides, melting icecaps and erratic weather patterns – California has chosen to act.

And let me point out that as we have acted, we have also seen our economy grow. Since the year 2000, California’s economy has grown by 46% and our population has grown by 16%, all while greenhouse gas emissions have been reduced by nearly 10%.

Currently, we generate about a third of our energy from renewable resources, mostly from wind and solar power. In order to power our grid when the sun isn’t shining and the wind isn’t blowing, we are investing in energy storage, and currently boast the largest storage market in the US.

Increasing energy efficiency is also a priority. We are on pace to double our energy efficiency savings by 2030 through modernizing building codes, requiring more efficient home appliances, and adopting incentive programs to encourage Californians to simply use less.

On the transportation side, California is home to nearly half of all zero-emission vehicles in the US. We are home to 90% of the total US investment in clean transportation, and 11 electric vehicle manufacturers. Tesla, which made electric cars cool, is leading the way.

With the policy changes outlined above, California is on pace to drive down greenhouse gas emissions to 40% below 1990 levels by 2030. We are also on track that by 2045, 60% of all electricity generated from our power plants will be derived from non-carbon based sources, and all our electricity will be carbon emission neutral. By 2045 the economy of the State of California will be carbon neutral.

As proud as we are of this goal, we are also aware that reducing carbon emissions will not be enough to fix the damage already done.

According to the October 2018 Intergovernmental Panel on Climate Change report, to keep warming below 1.5°C, removing carbon already in the atmosphere will also be necessary. This is truly the moonshot.

For carbon capture projects that have already been verified as effective, our Air Resources Board has developed a protocol that will provide financial incentives for eligible projects. But this is just a start.

And this brings me to the fact that of all California’s work in combating climate change, our most important contribution is our investment in research and development. Right now, across our state, the next great breakthroughs are being pursued by researchers, entrepreneurs and visionaries. These committed women and men are tirelessly working on the next generation of battery technology, low-carbon fuels, renewable energy, carbon capture and so much more.

PART III: CALIFORNIA IS PARTNERING WITH CHINA ON CLIMATE

As we have charted this ambitious pathway, over the last decade, a strong partnership between California and China has emerged. It is built on a foundation of friendship and a recognition that the earth’s changing climate is an existential crisis that threatens us all.

Since 2013, California and China have signed several memoranda of understanding at national, provincial, and municipal levels. These agreements have established a framework for high-level engagement, agency staff-level policy exchanges, extensive research collaborations at our universities and research institutions, trade delegations, and billions of dollars in investment by both governments.

Our partnership was initiated around sharing best practices to reduce air pollution. California has made great progress in addressing air pollution in our state, and we were more than willing to work with China to meet their challenges. For nearly two decades, we have shared best practices to strengthen vehicle pollution standards, promote environmentally sustainable ports, and improve maritime vessel compliance with fuel regulations.

California is extremely proud of our Cap-and-Trade program. This carbon emissions trading program is designed to limit carbon emissions, while generating substantial revenue. It is considered one of the best models in the world, and has been essential in helping our state meet the goals that I just outlined. Since our emission trading system first started collecting revenues in 2012, we have appropriated over $9.3 billion in clean transportation programs, low-carbon communities, energy efficiency projects, sustainable forests and agricultural lands, and many other programs aimed at reducing greenhouse gases.

As China works to develop its own national Cap-and-Trade program, California has been happy to assist. We formalized our cooperation through agreements signed with the National Development and Reform Commission, and have been closely engaged with the regional pilot programs.

What China is attempting to do is no small feat. When fully operational, China will have the largest emissions trading market in the world. We look forward to continuing our collaboration, in order to help generate critical resources to invest in clean energy solutions.

Finally, in the area of zero-emission vehicles, California and China are also collaborating. China now has the most electric cars, motorcycles and buses in the world. Just as California has the highest percentage of electric cars and buses in North America. Our mutual commitment to ZEVs alone is worth recognizing, as together we are helping create the demand that will drive the expansion of the industry.

Nearly 1 in 10 cars now sold in California are zero emission vehicles, and we are proudly home to the Chinese company BYD, which has manufacturing facilities in California that are producing the next generation of electric busses and shuttles.

As you can see, the relationship between China and California around combating climate change is robust, and already producing real results. We are proud of this partnership, and because of our experiences working together, we believe in China’s understanding, and ability, to help lead the world on this issue.

The Belt and Road Initiative presents perhaps the greatest opportunity to date for China to affirm its commitment to combating climate change. As China continues to develop its goals for BRI, we in California hope to see this issue prioritized and at the top of the agenda in every single one of the BRI projects.

China has the opportunity, through BRI, to help set new standards in the world not just for addressing climate change, but for all aspects of environmental protection beyond those I’ve discussed today.

California stands ready to continue to partner with China, and all the world’s nations, to work together toward this important goal.

With that in mind, I would like to close with a quote from arguably one of the most impactful, and best-known of my fellow Californians, the founder of Apple Computer, Steve Jobs.

He captured the culture and ambition of Californians very well when he said this, “The people who are crazy enough to think they can change the world are the ones who do.”