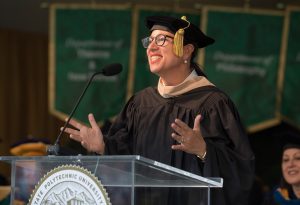 President Coley, Dean Iris Levine, parents, faculty, friends and students of the Class of 2019, it is an honor to be here with you today as you celebrate this special, important and memorable day.

I am very proud to have been elected last year as your Lt. Governor, the first woman ever elected Lieutenant Governor in the history of the state of California.

You might say “That sounds great. But what does the Lt. Governor do?” One of the best parts of my job is to serve as a member of the California State University Board of Trustees.

Although I myself did not graduate from the Cal State University system, it played a very important role in my life. You see, I am the daughter of a refugee from Greece. My grandmother, who had ten children of which only 6 survived, never went to school for a single day. She never had a chance to learn to read or write.

But she was very strong. As a mother myself, I often imagine how hard it must have been for her to let my father leave the village, at just 14 years old, to travel to America.

He was alone, had little money and spoke no English. After a long journey, he landed in Lodi, in the central valley of California, where he went to school and worked in the fields as a farmworker.

Life was hard. But to him, Lodi was paradise. Unlike his homeland, where German Nazi soldiers had taken residence in part of our family’s village home, here there was no war. There was no fear. And unlike the rocky soils of Greece, California soil was – as he often said – like soft cake, that didn’t require picking out the stones one by one, before planting crops.

The people my father met in California were generous and kind, and he worked his way to Sacramento and enrolled at Sacramento State University. Tuition at that time was $62 a semester. He was able to pay his way through while working as a waiter – sometimes as part of the catering staff in the Governor’s mansion. My father’s ability to go to college changed the trajectory of his life, and by extension, mine.

I know that this story is familiar to many of you here today. The majority of the class of 2019 are the first in your family to graduate from college. It is an awesome accomplishment.

An awesome accomplishment not just for you, but for all of us. Because the story of America, the story of California, has always been a story of each generation having the opportunity to surpass the achievements of our parents. And your story is just beginning.

From here, you will go out into the world and pursue careers, chase your dreams, become innovators, artists and leaders. As Cal Poly Pomona graduates, you are standing at the threshold of great opportunity. Your university is ranked third in the nation on the 2018 social mobility index. Third in the nation in terms of students graduating and going on to achieve economic success.

I’d like to share a story from my childhood. When I was in 7th grade, a girl in my class named Jane Ann brought a certificate that showed her family had come to America on the Mayflower. Now, I knew that my father had also come over on a boat, and it was NOT the Mayflower.

When I went home, I asked my dad if anyone in our family had ever done anything special. He straitened up and said, “Eleni, you go back to school and tell your friends you are related to Aristotle, and Alexander the Great.”

I didn’t tell my friends that. But it set off a fascination of the world of Ancient Athens, the birthplace of democracy. Some Athenians were skeptical about Democracy, especially the philosopher Plato. He thought it was too messy, too inefficient, and that over time, democracies would be overwhelmed by problems and not endure.

Class of 2019, as you take your first steps into the wide, wide world, I hope you will never take your success for granted. Because our system of democracy – the system that, while not perfect, makes so much possible does not exist in a vacuum. Our system of self-government requires everyone to pitch in and participate however we can.

For some of you, it might mean going to city council meetings and speaking out when something in your neighborhood needs fixing. For others, you might become active in important public policy issues like immigration, criminal justice reform, climate change or women’s rights. For others, it might be giving back to the university that will continue to provide a world class education to the next generation of dreamers and strivers.

Maybe, it will just mean that you vote in every single election for the rest of your lives.

Class of 2019 it’s exciting to think about what lies ahead for you. Be courageous, fear nothing, own your own future. And above all else, never forget that you are part of something greater than just yourselves.