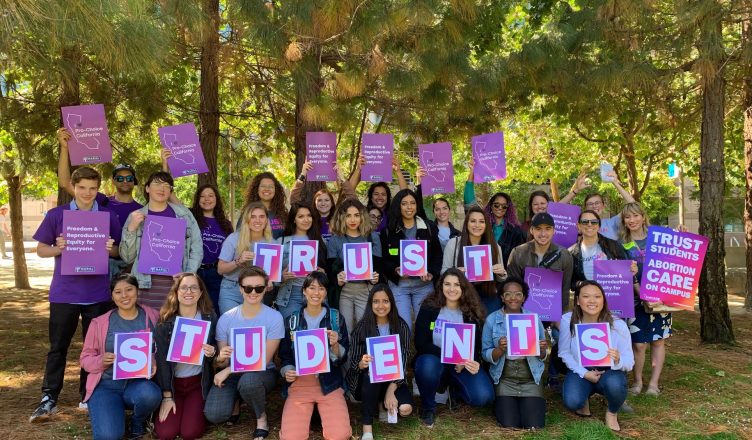 University of California students demonstrated outside of the UC Board of Regents meeting on Wednesday, July 17 in support of Senate Bill 24, which aims to expand medication abortion access on California’s public university campuses. This demonstration, which was led by the justCARE campaign, comes after the Board of Regents has publicly remained neutral on the issue while the bill has passed the Senate, as well as two Assembly committees.

As previously reported by the Guardian, SB 24 would mandate that medication abortion be provided by the student health centers on all University of California and California State University campuses, as well as to create a College Student Health Center Sexual and a Reproductive Health Preparation Fund to provide $200,000 grants to each university’s Student Health Center.

Among the students demonstrating at the Board meeting was Elizabeth Kavianian, a fourth year student from UC Riverside. She gave a speech to the Regents during the meeting discussing why expanding access to abortion services on campus is such an important issue.

“I explained that I’m here today to ask the Regent to trust students and to support abortion access on campus,” Kavianian told the UCSD Guardian. “[Medication abortion] is an effective method of ending a pregancy. We should be able to get this type of care at student health centers just like we can get any other treatment there. I concluded by saying that I’m proud to join thousands of California students in publicly supporting this bill.”

Kavianian emphasized the importance for the UC Board of Regents to support the bill, as they have so far remained neutral on the issue as of the writing of this article.

“As a student of the [UC] system, it’s important for the institution to back up the population that its serving,” Kavianian said. “This is another opportunity for students to be successful and to make choices about their bodies in the way they want to. It’s important for students to have this choice, so [the Board] needs to trust us to make the choice that’s right [for us].”

While the Regents have yet to come out in support or against SB 24 following the demonstration, during the meeting, Lieutenant Governor Eleni Kounalakis tweeted out her support for the students, thanking them for voicing their support for the bill.

JustCARE California is a student-led organization with the goal of bringing greater abortion access to California college campuses via activism. The group is sponsored by The Women’s Foundation of California, ACT for Women and Girls, ACCESS Health Justice, and California Latina’s for Reproductive Justice.

If SB 24 goes on to pass the Assembly floor vote and is signed into law by Governor Newsom, all California public universities would be required to provide students with medication abortion by January 1, 2023.