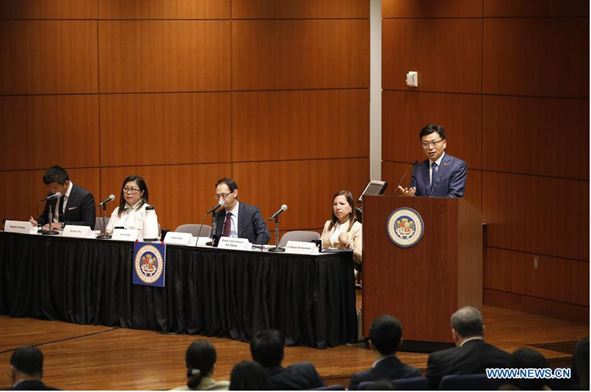 The prolonged trade dispute between the U.S. and China is harming California’s economy, the fifth largest in the world, and threatens millions of jobs dependent on international trade, said California Lieutenant Governor Eleni Kounalakis.

Weeks after U.S. President Donald Trump held off on further tariffs on over $300 billion of Chinese imports, the president on Tuesday expressed a renewed willingness to use punishing tariffs against China.

The proposed 25 percent tariff on all goods imported from China, a fourth round of tariffs, are mostly consumer and electronic products.

“It’s very possible that we will not see an end to this dispute any time soon and our state must prepare for a prolonged impasse. The time it takes for these issues to resolve means more money coming out of California’s pocket,” said Kounalakis at a hearing of the California Assembly Select Committee on Asia/California trade and Investment Promotion on Wednesday.

“It’s American consumers who are paying the price of tariffs, not China. The impact of the tariffs up to this point is estimated at approximately $490 in increased costs for an average American household of four,” said Kounalakis, a former U.S. ambassador to Hungary.

The hearing is the second in a series to examine the impact of the U.S. trade dispute with China on California’s economy.

Kounalakis said the impacts were “especially worrisome” as California is deeply integrated into the global markets and supply chains.

California is No. 1 in the country in agricultural exports and exports of machinery and electronics. Last year, California exported more than $16 billion in goods to China, the second-largest exporter state after Texas. In the first three months of this year, California exported $3.8 billion in goods to China, ranking it first among all the states, according to a report prepared by the California Assembly Committee on Jobs, Economic Development and the Economy.

“California has a great deal at stake. And we are already feeling the impacts of the U.S.-China tariffs dispute,” Kounalakis told the state lawmakers.

“Trade supports the entire supply chains and wages for workers throughout the supply chains. Many Californians’ livelihoods are tied to the goods movement industry and an estimated 20 percent of all the jobs in California depend on international trade and investment,” she said. “That’s about 5.4 million California jobs. And these are good middle class jobs with decent wages.”

The U.S. Chamber of Commerce estimated that $13 billion of California exports are threatened by the tariffs. Exports from California ports to China were down 9 percent year to date in 2019, compared to the first five months of 2018. According to data of the Port of Long Beach, in May this year the container trade with China, both imports and exports, was down 18 percent from the same month a year earlier.

Agricultural products in California have been particularly hard hit by Chinese tariffs. Important crops, such as California’s top commodity almonds, have been a key target of China’s retaliatory tariffs.

“It’s not as though other countries are sitting idly by. Australia has a free trade agreement with China, providing the opportunity to replace California’s almonds with no tariffs,” Kounalakis said.

The dispute is also disproportionately felt by small- and medium-size businesses, said Kounalakis.

The state’s small business sector employs half of all workers and is composed of more than 98 percent of all businesses in the state, according to the committee’s report.

Over 70,000 small businesses in California are engaged in exports, but they do not have the same resources as large companies to shift their supply chain or find new international customers, said Kounalakis.

“The impact on California companies attempting to stay afloat to continue importing from China in this current environment is very serious,” she said.

It’s normal for the world’s two largest economies to have differences in the economic and trade field, and the key is to properly manage and control the risk in a spirit of mutual respect,” said Deputy Chinese Consul General Ren Faqiang, who also testified at the hearing.

“More communication and dialogue on equal footing is essential to solve the issue and strengthen the relationship between the two countries. Both voices of Washington and Beijing should be heard,” he said.

“This is an issue of the relationship between these two important countries,” said Ker Gibbs, president of American Chamber of Commerce in Shanghai, who attended the hearing as audience. “We agree with the administration that it does need to rebalance (the relationship), but we don’t agree with the way it’s being done.”

“Tariffs don’t help anyone, and the way the administration is handling it is not productive, and it’s permanently damaging the relationship that has been extremely productive for the last 40 years both for the U.S. and China.”