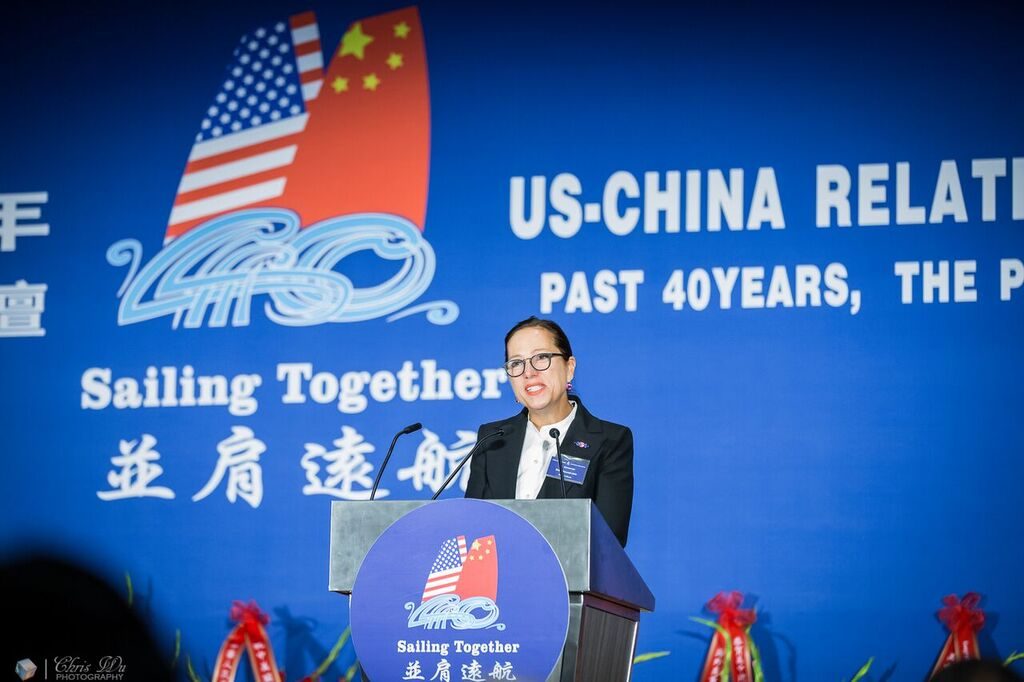 Thank you for your very kind words of introduction, James, and to you, Mrs. Fang, for organizing this gathering today

to mark the 40th anniversary of diplomatic ties between the United States and the People’s Republic of China. And thank you so much for inviting me to address this wonderful and impressive group of participants. I am honored to be here.

It shows great foresight and wisdom that you have chosen to focus this Summit not only on the past 40 years, but more importantly, on the next 40 years, and on the role that will be played by our younger and future generations in shaping, managing, and profiting from what is already a remarkable relationship.

But before we discuss the future, I think it is important to touch on the past and to talk a bit about how we got to where we are today.

Of course, all of us in California know that our relations with China didn’t just begin 40 years ago. China and California have been inextricably intertwined since the earliest days of our statehood. The Gold Rush of 1849 not only brought prospectors from the young United States, but also from ancient China. By 1852, there were over 25,000 Chinese in California. By 1880 that number had increased to 300,000 and Chinese immigrants accounted for nearly one-tenth of California’s population.

They came for gold. Others to work on the railroad – a bold and treacherous project that took many lives, but linked the two coasts of our great nation; an engineering feat that could not have been successful without the blood, sweat and dedication of those hard-working immigrants. They came to open small stores, laundries, and restaurants. And many succeeded and prospered.

These early immigrants, like immigrants to the United States from Europe and elsewhere, came seeking a better economic future for themselves and their children, or to flee violence and political instability in their own lands. They faced many, many difficult challenges, not the least of which were xenophobia, racism, and discrimination. But their struggles were rewarded, and in a country where the rule of law is sacred and sacrosanct, their tribulations helped to begin to shape our laws that today seek to guarantee equal rights for all.

California, with its magnificent location on the Pacific coast, has always looks west, to the Far East, in its commercial and trading dealings. This meant that China and California were destined to become close partners. And as ocean going shipping increased, and air links were established, the distance between California and China lessened, and the ties grew closer.

By the early 1940’s, China and the United States were strategic allies in a partnership that led to victory in World War II and to seats for both on the Security Council of the newly-created United Nations, founded, where else, but in San Francisco. However, a few short years later, China, now led by the communists, and the United States were mortal enemies in the bloody and bitter Korean War. This was followed by the Cold War in which the Communist government of the People’s Republic of China was an adversary with political and economic ideologies that were radically different from our own.

Ultimately, however, our wary political relations yielded to changing realities brought by the passage of time, and this led to political recognition and the opening of diplomatic relations between the United States and the People’s Republic of China in 1979. This development did not, of course, mean an instantaneous change in the relationship. The U.S. and China continued to view each other as adversaries, and to conduct their relations accordingly.

Slowly, led by entrepreneurs and businessmen and women on both sides, and gradually encouraged by a less economically rigid leadership in China, commercial relationships were developed, nurtured, and expanded. Incidentally, it comes as no surprise that many of these pioneers on our side were members of our Chinese-American community here in California who had the ties, connections and cultural awareness necessary to develop economic partnerships with China.

So, here we are today. Forty years later. China and the United States are the first and second largest economies in the world. Last year U.S. goods and services trade with China totaled an estimated $737 billion. Exports to China totaled $179 billion, imports amounted to $557 billion. And the amount of Foreign Direct Investment between China and the U.S. totaled more than almost $150 billion. A significant percentage of these figures are made up of trade between China and California, which is the leading economy in the United States. I’m sure you’ve heard it said often – but I’m proud to say it again – that if California was an independent country our economy would be the fifth largest in the world.

But despite these impressive numbers, I don’t need to tell you that our relations with China are not doing very well today. We are in the midst of an economic trade war with no end in sight, and it is escalating by the hour. Political and military tensions in the Far East are also rising, as China chooses to flex its new found and growing military and economic capabilities in their neighborhood. These rising tensions cannot be ignored.

Which brings us to the question of how we move forward, in a positive way, for the next 40 years. First, let me be clear that I am an optimist. I think the future remains bright thanks to the enduring strength of relationships we all have built. We need to continue to work with and lead our friends and allies in developing and enforcing the international norms, standards, and values that will guide us in the future.

So, how do we do this? We do it by building bridges, not walls. We work with friends and allies, rather than alienate them. And we methodically and strategically negotiate with our adversaries to peacefully resolve differences in a manner that can lead all parties to walk away from the table more or less happy.

International relations are not and can not be based on a transactional “win-lose” mentality. They must be “win-win.” Why? Because the losers don’t forget when they feel humiliated and it spurs feelings of resentment. History is full of such examples. Mistakes, misunderstandings, missteps and sometimes even bruised egos can lead to wars, which all leaders must seek to avoid.

Where and how does bridge-building begin? And what are their foundations based upon? People-to-people contacts. That is why Summits like this one are so important. This is where it all starts. Commercial exchanges. Business exchanges. Cultural exchanges. Educational and academic exchanges.

It is natural for close partners to experience periods of conflict and contention. But what allows institutional and international relationships to survive the tough times are the human interactions and relationships that exist at the lowest levels, at the foundations.

Here in California we are proud of our diversity, which makes us stronger, more innovative, more resilient, and more unified. And we see this diversity personified better than anywhere else in our younger generations. They are the ones who soon will be guiding our international relationships for the next 40 years. They are more tolerant, more open to change, more collaborative, and less saddled by the baggage of the past. And where this all begins to take root is on our college and university campuses.

As a Regent of the University of California system and a Trustee of the California State Universities, I see first hand the world-leading educations these institutions provide their students, both Californian and those who come from abroad. Fully 9% of students at our University of California campuses are from China. And an even larger percentage are Californians of Chinese descent. These are our – and China’s – business and government and academic leaders of tomorrow. This is where the bridges, not the walls, are built.

To conclude, Mrs. Fang, thank you again for giving us this opportunity to pause to take note of the past 40 years in U.S.-China relations, and more importantly, for asking us to take the time to think hard about how the next 40 years will play out. I wish all of you fruitful and interesting conversations for the rest of today’s Summit meeting, and I hope you will leave more committed than ever to working toward maintaining and advancing positive, peaceful, and mutually beneficial relations between the United States and China.