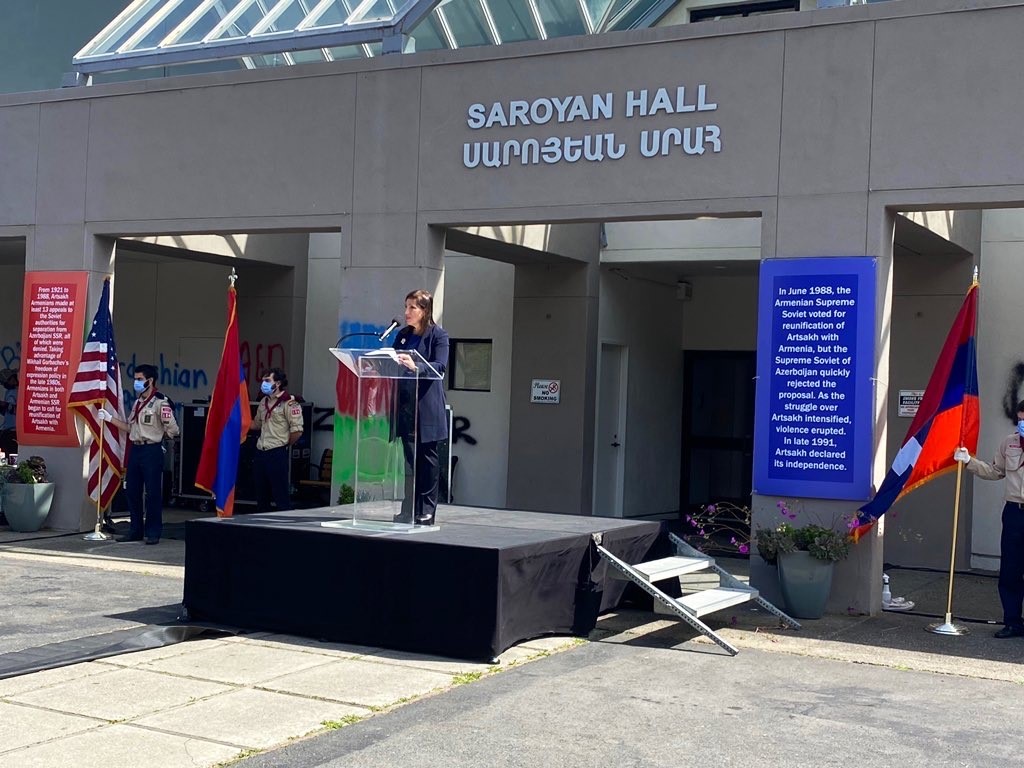 It is my solemn and steadfast duty, but more importantly my heartfelt desire to be with you here today, and to stand with you to forcefully and unequivocally condemn the heinous acts of vandalism that were committed at this school for innocent young children on July 24. I am also here to condemn the violence that was recently perpetrated against members of the Armenian-Californian community in Los Angeles on July 21, as well as the aggressive military action that was launched against the peaceful Armenian nation on July 12.

Sadly, we have seen this all before, and that is why it is so important to be here together today. We are aware of the unspeakable acts of barbarity that were inflicted on the Armenian people in the last century.

California’s political leaders – Governors, Legislators and I – have made it crystal clear that Armenians were the victims of Genocide in the 20th century, and that the violence they suffered must never be inflicted on anyone, ever again.

Last August I had the amazing opportunity to travel to Armenia to meet its wonderful people, to view its magnificent beauty, and to learn more of its incredible history. My visit included a tour of Etchmiadzin, the first and oldest cathedral in the world. But the most moving, the most emotional part of my journey was my visit to the Armenian Genocide Monument and Museum, where I was honored and humbled to lay a wreath and plant a tree in honor and in memory of the millions of innocent Armenians whose lives were brutally taken by cold-blooded oppressors.

As I said at the site of the genocide museum: we must ceaselessly and clearly affirm and proclaim that we all stand with the Armenian people in mourning your losses, recognizing your resilience, and sharing your commitment to work tirelessly and steadfastly to assure that humankind never again experiences the genocide that your forebears so grievously suffered.

The vandalism perpetrated here at this school must be seen for what it really is: not some simple act of misguided delinquents, but an attack on a people, on a culture, on a nation, on the very ideal of peaceful coexistence so passionately promoted by the Armenian people. And the fact that it was done at a place of learning for children exposes it for what it is: a hate crime meant to intimidate, to instill fear, and to terrorize a whole community, not just today but for the lifetimes of the young people who attend this school. We cannot remain silent. We cannot let this happen again. Those responsible must be found and held to account.

As I noted several days ago, people must be free to express themselves peacefully and nonviolently. And that’s just what a group of Armenian youth set out to do recently in Los Angeles. I know this community well: I was present with a group of thousands last September when we welcomed Armenia’s Prime Minister, Nikol Pashinyan, to California. These young people intended to exercise their rights to peacefully call attention to the recent military aggression launched against Armenia, aggression which has taken innocent lives, damaged civilian facilities – including a PPE factory -and which included threats to attack the country’s nuclear power plant. It’s unacceptable that violence resulted when they were confronted by a group of counter protestors. And I will say it again: violence against the Armenian community will not be tolerated in California.

As a proud Greek American, and daughter of a Greek immigrant, who spent many Sundays right here on Brotherhood way, just down the street, I want to assure you that I will always stand with my Armenian sisters and brothers to build a better, more secure life for our families and communities. That is what the California dream promised our parents and our grandparents. Together, we will ensure that this dream stays strong for future generations.