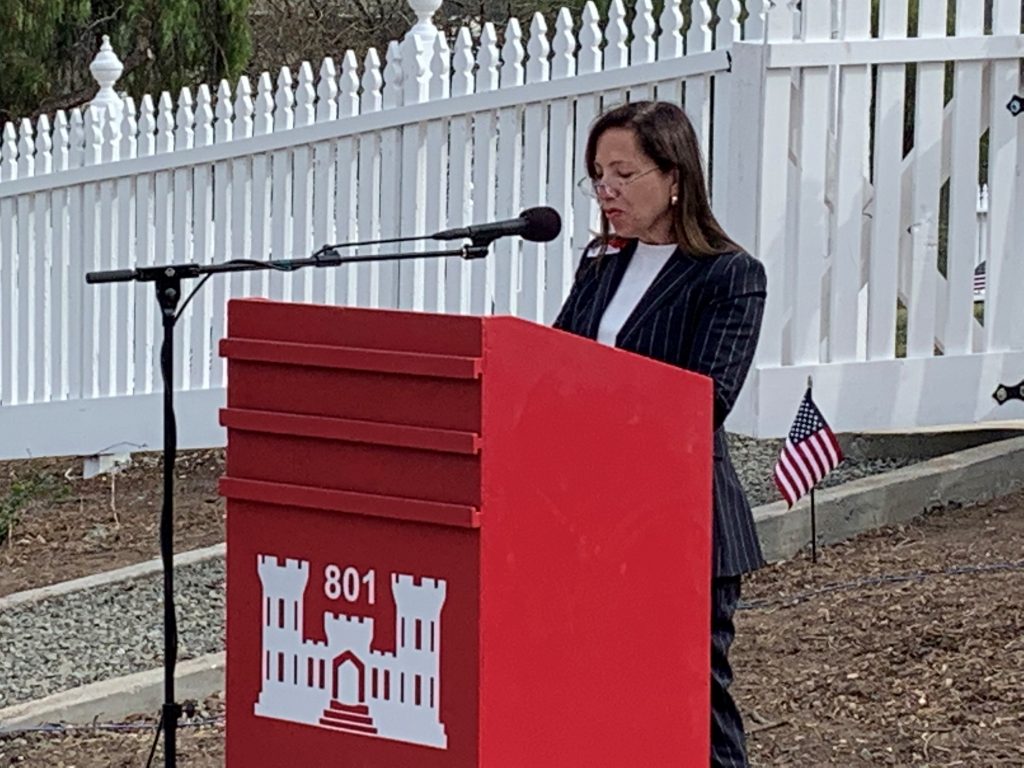 I am touched and humbled to be among you on this most special of days, in this most special of places, as we remember and honor the duty and sacrifice of all of our veterans, living and departed, who have served our great country, guarded our borders and ideals, and protected their fellow citizens from harm, both in times of peace and in times of war. This Veterans Day is all the more special as we gather here to rededicate the oldest naval cemetery on the West Coast.

One hundred and two years ago today, at the eleventh minute of the eleventh hour of the eleventh month of 1918, the guns fell silent, and the Great War – World War I – came to an end. One year later, on November 11, 1919, President Woodrow Wilson declared: “To us in America the reflections of Armistice Day will be filled with solemn pride in the heroism of those who died in the country’s service, and with gratitude for the victory . . . .”

In 1954, Armistice Day officially became Veterans Day, honoring not only those who gave their lives but all veterans who have served honorably in the U.S. Armed Forces. It is the day when all Americans pause to say “thank you” to our men and women who have worn the uniform of our nation.

But here, in this place, today, we must also pause to recognize and say “thank you” to those who have worked so long and so hard to restore these hallowed grounds to the status they demand and deserve.

Traveling around the globe, you will find no places more beautiful or immaculately kept than the American military cemeteries and memorials that serve as the final resting places for our soldiers, sailors, airmen and Marines who died fighting for our country in foreign lands. And here in America, our national cemeteries are quiet, dignified, pristine places of reflection and respect.

It is a shame that the Mare Island Naval Cemetery where we gather today fell into a neglected state. The men and their family members who repose here served, and some died, under the Stars and Stripes.  They deserve the same honor, the same dignity, and the same care as those who silently stand in their eternal final formations in Arlington, in Normandy, in North Africa, in the Philippines, in Panama, or closer to home at the Golden Gate National Cemetery.

I know that many people are responsible for the work that has been done and is ongoing to restore this special place. But let me recognize, in particular, U.S. Representative Mike Thompson, a decorated veteran himself, wounded in action in Vietnam, who has worked tirelessly to enact the legislation required in the House of Representatives to return this cemetery to the jurisdiction of the United States government which should justly care for the hallowed grounds that hold the remains of our veterans and their family members.

Congressman Thompson was joined by my dear friend, Senator Dianne Feinstein, who introduced and has fought to pass the required companion legislation in the Senate. I know that both of them would have loved to have been here today, and would have been, were it not for the current health crisis we are enduring.  And I know that each and every one of us would give them a standing ovation if they were here, to thank them for all they have done.

But getting the legislation passed to return this land to the control of the federal government is not the final step. Nor was it the first step.  The hard work of returning this cemetery to a place of serene beauty has been undertaken with care and respect by the men and women of the 801st Engineering Company of the U.S. Army Corps of Engineers, based here in Vallejo under the command of Colonel Chad Kirchner.  Colonel, I have seen photos of how this place looked only a short time ago, and you and your engineers are to be commended.  Thank you.

And before the legislation, before the shovel work, came the first steps: the commitment of motivated individuals who saw that something needed to be done, dedicated themselves to the mission, and relentlessly pushed forward to inform, educate, and encourage our political leadership in Washington to take the actions needed to put right a situation that needed to be fixed. Colonel Aliga, you and Captain Ralph Parrot, Thomas Bandzul and Robert Wylie, among others, are to be commended and thanked for all you have done and continue to do to make the Mare Island Naval Cemetery a place worthy of that name and, more importantly worthy of the more than 800 departed souls whose remains rest here.

Mayor Sampayan, I’d also like to thank you, the City Council, your Department of Public Works and the citizens of Vallejo for your efforts over the years to do the best job possible to maintain this cemetery given the limited resources available, and for continuing to host these important ceremonies at Mare Island on Veterans and Memorial Days to honor the dead and to keep alive the values of service and sacrifice, along with the democratic ideals that keep our country strong.

A little over two years ago, on Memorial Day 2018, then-Lt. Governor Gavin Newsom spoke at this cemetery. He noted with pride that here in California we are home to over two million veterans, more than any other state in the country.   He pointed out that these heroes have provided a great service to our country, and that it’s our responsibility to meet their needs when they come home.  He pledged to thank them with more than words and parades one or two days a year, but with meaningful actions and smart policies every day of every year.   I know that he has been doing just that, and Deputy Secretary Xochitl Rodriguez Murillo, here with us today and herself a proud veteran, has been seeing to it that our state keeps its word to our veterans and will continue to do so without fail.  Thank you, Xochitl, for all that you, Secretary Vito Imbasciani, and everyone at the California Department of Veterans Affairs is doing for our veterans.

As we rededicate this cemetery today, it is fitting that we recall the words of President Abraham Lincoln in his Gettysburg Address:

“We cannot dedicate – we cannot consecrate – we cannot hallow – this ground. The brave men, living and dead, who struggled here, have consecrated it, far above our poor power to add or detract.”

To conclude, let me thank everyone who made this event possible; from the Sea Cadet Corps and the active members of the U.S military here with us and flying overhead, to the groundskeepers who readied this site, and to every one of you who took the time to join us today. But most importantly, thank you to our veterans.  We love you and we honor you!