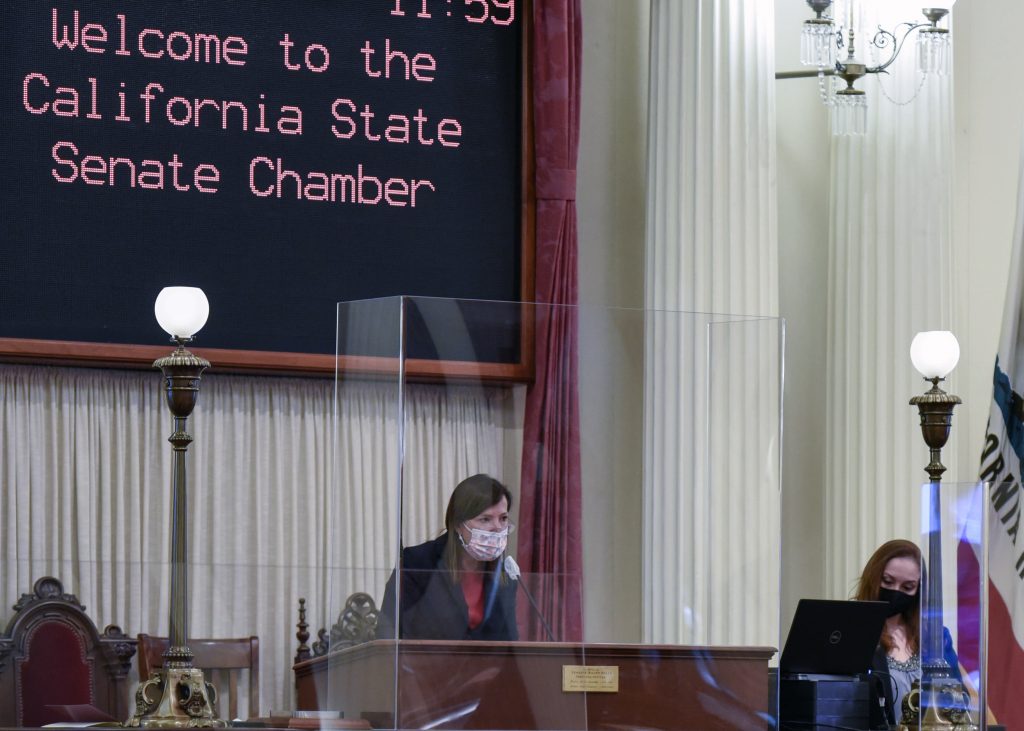 Lt. Governor Kounalakis speaks at the Senate Session on December 7, 2020

Good afternoon. Welcome to the convening of the 2021-22 session of the Senate of the State of California.

Madam President Pro Tem thank you for the honor of inviting me to preside today, and for your courageous leadership during these unprecedented times. Madam Secretary, Erika Contreras, thank you also for your service here today.

It is wonderful to see so many friends and colleagues, back together after many months apart. And even though we can only see the top half of each other’s faces, our old colleagues are immediately recognizable to one another. To all of the new members, congratulations on your elections and welcome to your new office in the senate chambers. And to all those participating from home, we look forward to seeing you in person as soon as possible.

About ten years ago, just before I was sworn in as a US Ambassador, I was visiting the Ops Center in the State Department’s main building in Washington DC. The Ops Center – short for operations center – is a windowless series of rooms where state department officers are on duty 24 hours a day monitoring global events in real time. Hurricanes, wars, military flare ups, airplane crashes, refugee migrations. It’s the ops center’s job to keep an eye out for big, sudden problems, and then alert the right people when they happen.

This was summer of 2009. And as I looked around the central room, I noticed a large white board, where in giant letters, someone had written H1N1. H1N1 – also called Swine Flu – was genetically the closest strain of flu to the 1918 pandemic that the world had seen since. The CDC now estimates that 60 million Americans – about 1 in 5 of us – were infected with H1N1. On the day I stood in the ops center, people were really worried. How bad would it be? How sick would people get? How fast would the virus spread? Fortunately, we would soon discover that the H1N1 virus, while highly contagious and difficult to contain, had a very low mortality rate, less deadly than the flu. The world got lucky.

Several years later, in 2014, the largest outbreak of the Ebola virus occurred in West Africa. This time, the virus was extremely deadly – an average of 50 percent of those who contracted Ebola died. But unlike H1N1, Ebola is far less contagious, it’s harder to catch – requiring very close physical contact to spread. Courageous health workers from around the world, including from the United States, mobilized and were able to contain the disease and minimize the spread – just 11 cases made it to the US. Again, the world got lucky.

I’m sharing this with you today because as someone who served as a senior US government official, I can tell you that we knew the day would come when the world experienced a global pandemic that would be both very lethal and highly contagious. We also knew that there was no way to be fully prepared until it happened.

In this context, I am very proud of California’s response to COVID19. From the beginning, we believed the science. We had faith in our public health officials. We had the courage to issue the first state-wide stay at home order in the country and most importantly, Californians had and continue to have faith in their government and are doing their part to comply.

Today, we mourn the tragic loss of 20 thousand Californians – and grieve with the families of those lost. But we should note that without the swift, decisive response from Governor Newsom and the California Legislature, the situation would have been far worse.

As you all know, we are in the middle of another spike in COVID19 cases, with a record 30 thousand new cases yesterday. Health care workers are bracing for more hospitalizations. Businesses are bracing for a new round of closures.

But this time, there is a light at the end of the tunnel. Vaccines are on their way, and as we prepare for another difficult few weeks, it is good to know that Governor Newsom and our state health officials are hard at work planning the distribution of vaccines, first and foremost, to our healthcare workers, then to essential workers, then to our most vulnerable.

As we open the senate’s 2021-22 legislative session, the work of this body is more important than ever. Ten million Californians have filed for unemployment since March. Families are struggling to put food on the table. Many businesses have shuttered, while others hang on by a thread. With schools closed, most of our children will miss an entire year of in-person learning.

And just as the challenges brought on by COVID19 await your action, so do persistent problems that our state has struggled with for years – housing shortages and homelessness, wildfires, income inequality, criminal justice reform, climate change and so many others. It’s a lot. But you are up to it.

Today, as it happens, is December 7th, “a day that will live in infamy”. Seventy years ago, US naval forces were attacked in Pearl Harbor. As we remember the veterans of the second world war, and the veterans of all our military engagements, let us also draw from their courage and resilience. With hard work, persistence, common purpose and robust debate, let’s set the best possible example for the people who we proudly serve – even with our own shortcomings, and human imperfections.

Finally, let me just note that very soon we will have a new government in Washington DC, a new president in Joe Biden and the very first woman Vice-President of the United States, our very own daughter of California Kamala Harris.

The days ahead both for us as a state, and for our nation, will be challenging as we make our way through what we hope are the final months of this global pandemic. With the leadership of this body, and the determination and commitment of our people, I truly believe California will emerge stronger than ever.