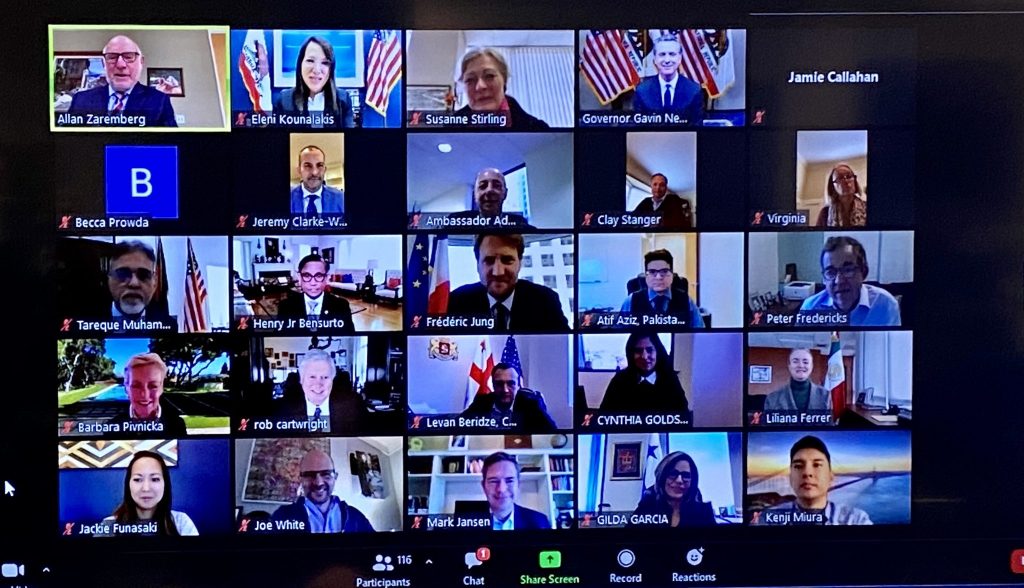 Thank you, Allan, and thank you all for being with us this afternoon. Every year, the Consular Corps gathers in Sacramento for the Host Breakfast and the CalChamber’s Consular Corp reception.  This has become a great tradition, and I know we will all be together again in person soon.  But in the meantime, I want to thank Allan, the amazing Suzanne Stirling, and their team at the California Chamber of Commerce for organizing this virtual event.  The chamber truly is our indispensable partner as we strive to promote and increase California’s international trade with countries around the world, represented here today by so many members of California’s esteemed Consular Corps. To all the consuls general, excellencies and diplomatic staff, it is an honor to welcome you here today.

In a few minutes you’ll be hearing from Governor Gavin Newsom. But before I introduce him, I’d like to say a few words about our ongoing international priorities.  It’s been almost two years since Governor Newsom and I were sworn in and since he appointed me to be his Representative for International Affairs and Trade Development.  I am deeply grateful to the governor for his faith in my abilities, and for his vision in working together to elevate California’s voice on the world stage.

Over these last two years, Governor Newsom has put in place some important structures to support our efforts. First, he established – by executive order – an interagency committee, which meets quarterly and is open to the public. This committee has already proven very effective in improving communication and cooperation across state government. Several members of the diplomatic corps have joined us at these meetings, and I encourage you all to participate in the future.

The governor also established a high-level team of international trade specialists, assigned by region, and housed within the Governor’s Office of Business and Economic Development. These trade specialists focus exclusively on our international relationships, and leverage the full capabilities of GO-Biz to expand foreign direct investment into our state.

I’m also pleased to report that California has opened the first of several international trade and service desks we plan on establishing abroad. The first one is in Mexico City, co-located at the Casa de California, and was established via an MOU between the state and the University of California.   Finally, we’ve rolled out the red carpet for visiting delegations and reinvested in our efforts to share best practices with experts who come from around the world.

Of course, over the past nine months, our ability to travel, to welcome delegations and to meet with you in person has been severely impacted by the COVID-19 pandemic. But it has not ended international engagements.  On the contrary, it has made our relationships more important than ever as we’ve all been focused on protecting the health of our people and the resiliency of our economies.

And while COVID-19 has changed HOW we work, the three major international priorities for California which have emerged since the governor established our new framework remain the same. These three priorities are immigration, trade, and climate. I’d like to touch briefly today on each one.

If you’ve ever heard me speak before you already know how proud I am of California’s diversity. Twenty-seven percent of us are foreign-born, and half of us – myself included – have at least one immigrant parent.  Our diversity makes us stronger, younger, more innovative, and more resilient and has been a primary driver of California’s economic success.

Of course, we don’t set immigration policies at the state level. It’s the federal government which regulates the admission of people into the United States. But California is disproportionately impacted. We have over 3.3 million green card holders in our state. The most H-1B visa recipients in the country live here. And according to researchers, as much as ten percent of California’s workforce is made up of undocumented immigrants.

Last year, when a refugee crisis struck our southern border and asylum seekers were suffering, the governor and state legislature stepped in to fund a $25 million Rapid Response Program. Applied over 3 years, these funds support humanitarian relief to those who arrive in our state often with little more than the clothes on their backs.

California welcomes people from around the world who come as students, businesspeople, entrepreneurs, tourists, asylum seekers and of course, immigrants. And we are very hopeful that the incoming administration of President Joe Biden and Vice-President Kamala Harris will bring immigration policies that are more humane, more just, and which recognize the realities of historic immigration patterns as well as the families affected by them.

The second priority I’d like to talk about is trade. Prior to the COVID19 crisis, the figures we used to quantify the importance of trade to the economy of California were quite dramatic. One out of five California jobs were associated with trade and tourism.  For years, California has ranked first in the country in exports, and first in foreign direct investment.  In 2019, 730,000 California jobs were related to FDI, generating an estimated $65 billion in wages. Also in 2019, 18 million international visitors came to our state.  18 million visitors, and they spent an estimated $28 billion at hotels, restaurants and shops.

Never in history have our leaders been in a situation where we’ve had to willfully shut down daily life, work, school and travel. But as a science-based state, we listened to our public health officials when they sounded the alarm about COVID-19. Governor Newsom became the first in the country to issue a state-wide stay at home order. It was the right thing to do, and saved thousands of lives. But it was unchartered territory.

During the second quarter of 2020, the economic hit to California was measured at 32 percent negative growth and all total, over ten million people have filed for unemployment insurance. Third quarter growth numbers for the United States have shown remarkable resilience of the national economy. While we do not have those figures yet for California, we know that California has shown economic resiliency too.

Exports from California are down 12 percent this year, far less than projected in March, and imports are down 5.5 percent. The San Pedro Bay port complex – including Long Beach and LA, make up the largest port system in the United States.  While exports will likely be down this year at LA/Long Beach, imports are now projected to significantly surpass last year’s numbers.

There are several key actions that have helped keep trade moving during the last few months. Federal stimulus funds, allocated by congress, allowed companies to hold on to employees and meet payroll, when the future was at its most uncertain. The governor’s economic task force helped develop protocols to safely restart manufacturing. And of course, Governor Newsom’s Herculean effort to acquire personal protective equipment – PPE – for essential workers, port workers, and eventually all workers, has been critical to keeping supply chains safely open, and saving jobs. Meanwhile, our international team has gone virtual – and we’ve held virtual trade shows with Mexico, Poland, Bahrain, Columbia and Chile. These events have exceeded expectations and may very well become a new standard for the future.

On a side note, it’s worth remembering that some of the declining trade figures between 2019 and 2020 have come as a result of the Trump administration’s tariff disputes. I am hopeful that the incoming Biden/Harris Administration will engage in more constructive and comprehensive trade policies. Putting pressure on countries to change uncompetitive trade practices is necessary. But we will keep urging solutions that bring more California products to other countries – more electric vehicles, more manufactured goods and of course more wine, cheese and tree nuts.

The third and final of California’s international priorities is also the one where our leadership means the most: combating climate change. Several years ago, when the Trump Administration announced its withdrawal from the Paris Climate Accord, Nobel-Prize winning scientist Mario Molina said “The global community is looking to California, as one of the world’s largest economies, to take the lead.”

We did. At home, we proved that we can grow our economy while slashing emissions. Governor Newsom successfully defended our state’s authority to set our own emissions policies and our cap-and-trade program. He struck deals with automakers to meet more stringent emission standards and set a goal of requiring all new cars to be zero emission vehicles by 2035. We are on track, and more committed than ever, to our goal of powering our state with 100% carbon-free electricity and achieving carbon neutrality by 2045.

On the global stage, California’s leadership on climate remains among the most steadfast, stable and reliable in the world. We are committed to sharing California’s lessons and learning from others, having signed over 60 bilateral agreements and participated in numerous technical exchanges.

Last year, I represented California at the Belt and Road Conference in Beijing. I went specifically to highlight our ongoing work with China to advance environmental protection. This year, I traveled to Delhi to speak at India’s Raisina Dialogues on opportunities to invest in the Green economy.

Just within the past few weeks I participated in conferences on the circular economy with the Netherlands, on hydrogen power with representatives from the European Union and Japan, and met virtually with our partners from Baden-Wurttemberg in Germany, to discuss the Under2 coalition, which we co-founded and now has over 220 sub-national governments as members.

Now, as 2020 comes to a close, we see that climate action is more urgent than ever. In California, we are concluding the worst fire season on record. Five of the six largest wildfires in CA history have happened this year, burning over 4.2 million acres – 4 percent of our state.  Many stepped up to help us this year and I would like to thank those countries that offered support during this devastating wildfire season.

The top three international priorities I just outlined – Immigration, Trade, and Climate – will continue to be at the top of our agenda in 2021. But as the world’s response to the COVID19 crisis enters what we hope is the final stretch, I’d like to take this opportunity to thank all the members of the diplomatic corps for their partnership over the last few months. During this extraordinary time, we shared critical information about the nature of the virus, and how to combat its spread. We worked together to repatriate our citizens stranded abroad in the early days of the crisis. We coordinated efforts to keep supply chains open – and create new ones for PPE and other essential supplies. And we’ve worked to keep business moving and protect as many jobs as possible.

I know you are all looking forward to hearing next from Governor Gavin Newsom. The governor often says that California is the country’s coming attraction. Right now, as vaccines present a light at the end of the tunnel, the governor is hard at work organizing a massive distribution effort – unlike anything we’ve experienced in modern times. I know he is focused on the future and on ensuring that the rollout of COVID19 vaccines will put us on a course to normality. Before I hand it off to him, I’d like to recognize that he has worked tirelessly over the last 9 months, day and night, in organizing California’s response. Thank you, Governor, for your remarkable leadership of our state during this crisis. Ladies and gentlemen, California Governor Gavin Newsom.