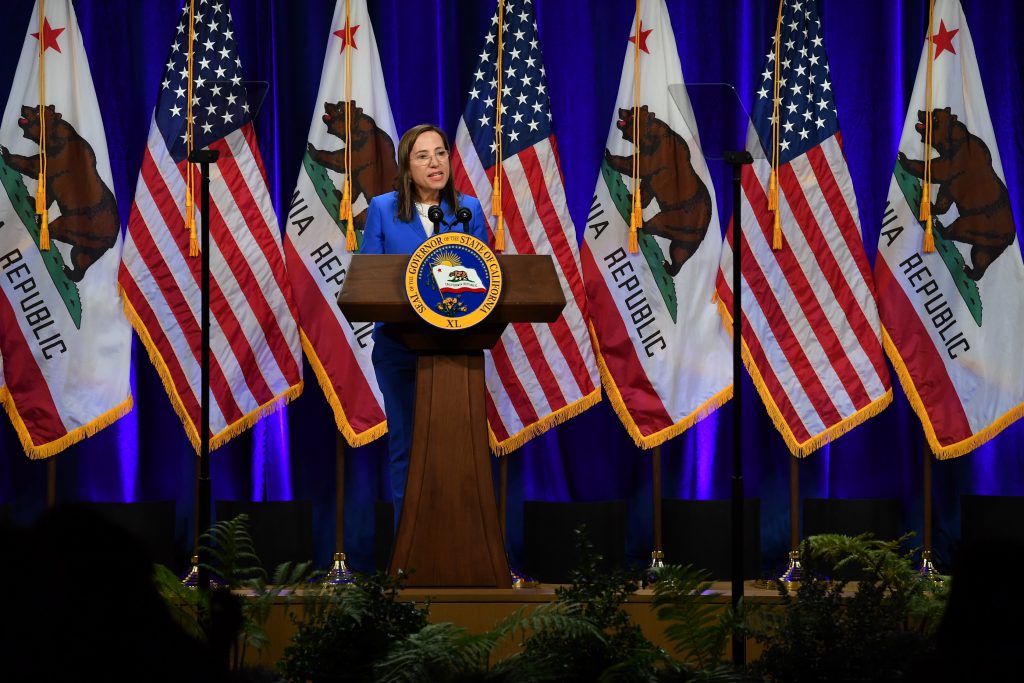 Lt. Governor Kounalakis giving her introductory remarks at the State of the State on March 8, 2022.

Thank you, Madam President Pro Tem and Mr. Speaker. It’s my great honor to offer a few introductory remarks before Governor Newsom delivers his FOURTH state of the state address.

Three years ago, soon after we both took office, the Governor asked me to serve as his representative for international affairs and trade development.

As a former US Ambassador, I am grateful to the governor and very honored that he trusts me to represent him in this way.

In just the last few weeks, I hosted Governor Ávila of Baja California, along with the US Ambassador to Mexico Ken Salazar, at the site of the Otay Mesa 2 border crossing, where I strongly urged them to work together to begin construction on the Mexico side. A few months ago, I joined many of you in Glasgow, representing California at the UN Climate Summit. And last September, I had the honor of welcoming to our state the President of Ukraine, Volodymyr Zelenskyy.

Back in 1993, just two years after the dissolution of the Soviet Union, the United States established a State Partnership Program between the newly independent Ukrainian Armed Forces and the California National Guard. Since then, thousands of soldiers and airmen have gone back and forth between our state and Ukraine.

They have trained together, conducted joint exercises and exchanges, and built long lasting bonds of friendship.

I welcomed President Zelenskyy at Moffett Field along with the Commander of the California National Guard, Major General David Baldwin. General Baldwin is here tonight, thank you for your service, General.

As President Zelenskyy, General Baldwin and I made our way down the tarmac viewing equipment, vehicles and aircraft on display, several California Guardsmen of Ukrainian descent came forward and posed with him for selfies. And at one point, one of our fighter pilots stepped forward.

He showed the President a special badge on his flight suit which he had earned during a joint training mission in Ukraine. The pilot, nicknamed Tigger, took the badge off his suit and presented it to the president.

Zelenskyy was moved by the significance of the gesture. He asked Tigger if he was sure he wanted to part with it. He then took it, tapped it to his heart, and told him he would keep it with him always. Two weeks ago, when the incursion began, that same Cal Air Guard pilot became one of the first members of the US military sent to Europe as a NATO advisor.

For 29 years, the California National Guard has played a major role in preparing Ukrainian troops for the conflict they find themselves in today. I join the many guardsmen and women who I know are sending support and prayers to their heroic Ukrainian friends today.

Governor, thank you for everything you are doing to support all aspects of the California – Ukrainian partnership and friendship. And thank you for allowing me to play a part in assisting your administration in this work.

And now, members of the California State Legislature and my fellow Californians, it is my honor to introduce the governor of the great state of California, Governor Gavin Newsom.