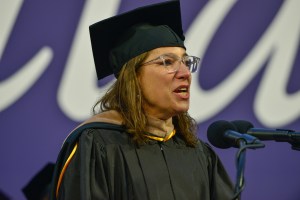 Graduates of the class of 2022 – Congratulations! Your hard work, persistence, and creativity have brought you to the culmination of your undergraduate or graduate education. You made it! You are on the threshold of your future, and you are destined for great and wonderful things! Congratulations to you and to your parents and family. This is your day too!

And again, my name is Eleni Kounalakis, California’s first woman Lt. Governor. I keep saying this because when I started working on these remarks, I learned that most college graduates do not remember who their commencement speakers were. And even fewer can remember what they said. Although B.D. Wong and the comment about the seagulls I’m never going to forget that.

So, tonight I am going to keep my remarks short, hopefully memorable and, tempting though it is, I am not going to offer you any advice.

Instead, dear Class of 2022, I’d like to share a few brief words and a few brief thoughts about American democracy, and your place in it.

In 1787, not long after the founding of the United States, Benjamin Franklin was walking out of Independence Hall in Philadelphia during the Constitutional Convention. A woman called out “What kind of government will we have? A republic or a monarchy.” Franklin replied, “A republic madam, if you can keep it.”

A republic, if you can keep it. From this country’s earliest days, there has always been a debate about how long American democracy could last. And while the United States is the world’s longest functioning democracy, generations of leaders have always known that our democracy – like those all around the world – is always a work in progress.

In my position (Lt. Governor of the state of California, just so you remember) people ask me all the time about the future of American democracy and what gives me hope. And my answer is you. Yes you, very specifically, the students and the graduates of the California State University system.

This year alone, the CSU will graduate not just the 7,000 of you here today, but 132,000 students across 23 campuses. With nearly a half a million students, you are part of the largest public university system in the country. When you graduate today you will join the ranks of 4 million CSU alumni. It’s enormous yes, but here is what makes it extraordinary: Half of the CSU students, including from this audience today, are from underrepresented minority groups, and one out of three of you are the first in your family to go to college.

My friends, you may meet people as you start your career who attended elite, exclusive universities. I hope you will believe me when I say that it is the inclusive universities like ours here in California which produce graduates – graduates like you – who power the future. It’s you, and your families who are the backbone of our state. You who are making your way up the ladder of success and bringing all of us with you. You who make up the innovative and creative force powering the world’s fifth largest economy, one of the most diverse and hopeful places in the world.

My father, his name is Angelo, came to California from Greece as a refugee after the second world war. He’s one of your fellow alumni and I’d like to tell you about him.
At age 15, he was working as a farmworker not too far from here, in the Central Valley. A local family took him in and encouraged him to go to college. He attended Sacramento State University and got the education he needed to start a business and thrive.

His mother, my grandmother, never learned to read or write. She could just barely sign her name. And in one generation, her granddaughter would become Lt. Governor of the state of California. I just want to you to have an answer one day.

I tell people about this story, and they are amazed. But to you, students of the class of 2022, it should come as no surprise at all. Because it is the story of generations of Californians who have made their way through the halls of the CSU system and of San Francisco State University in particular.

Your university education, like my father’s and so many Californians before you, is a pivot point. Today marks a change in the trajectory of your lives. From here, you will go on to be educators, medical professionals, counselors, computer scientists, political scientists, innovators, businesspeople – anything you want.

Now let me finish up by going back to Ben Franklin. When I was a US Ambassador, I had a bust of him in my office because flawed though he was, he was America’s first Ambassador and if your VENMO selves remember what cash is, you might know that his face is on the hundred dollar bill.

Here’s how he once summed up a description of the government he helped establish. He said, “Democracy is two wolves and a lamb voting on what they are going to have for lunch.” Ponder that for a while and ask yourselves, what would a gator do in that situation. How will you do your part to ensure liberty and justice for all?

And whatever you do, do it for yourselves, your families, and our democracy.

And please know that for me and everyone else up here on the dais, for your parents and family here with you today, and for our greater community, it is you who give us hope. You are ready. And we need you to help keep our republic sound, so we can deliver it whole to the next generation.