California and the Netherlands Forge Partnership on Climate Action 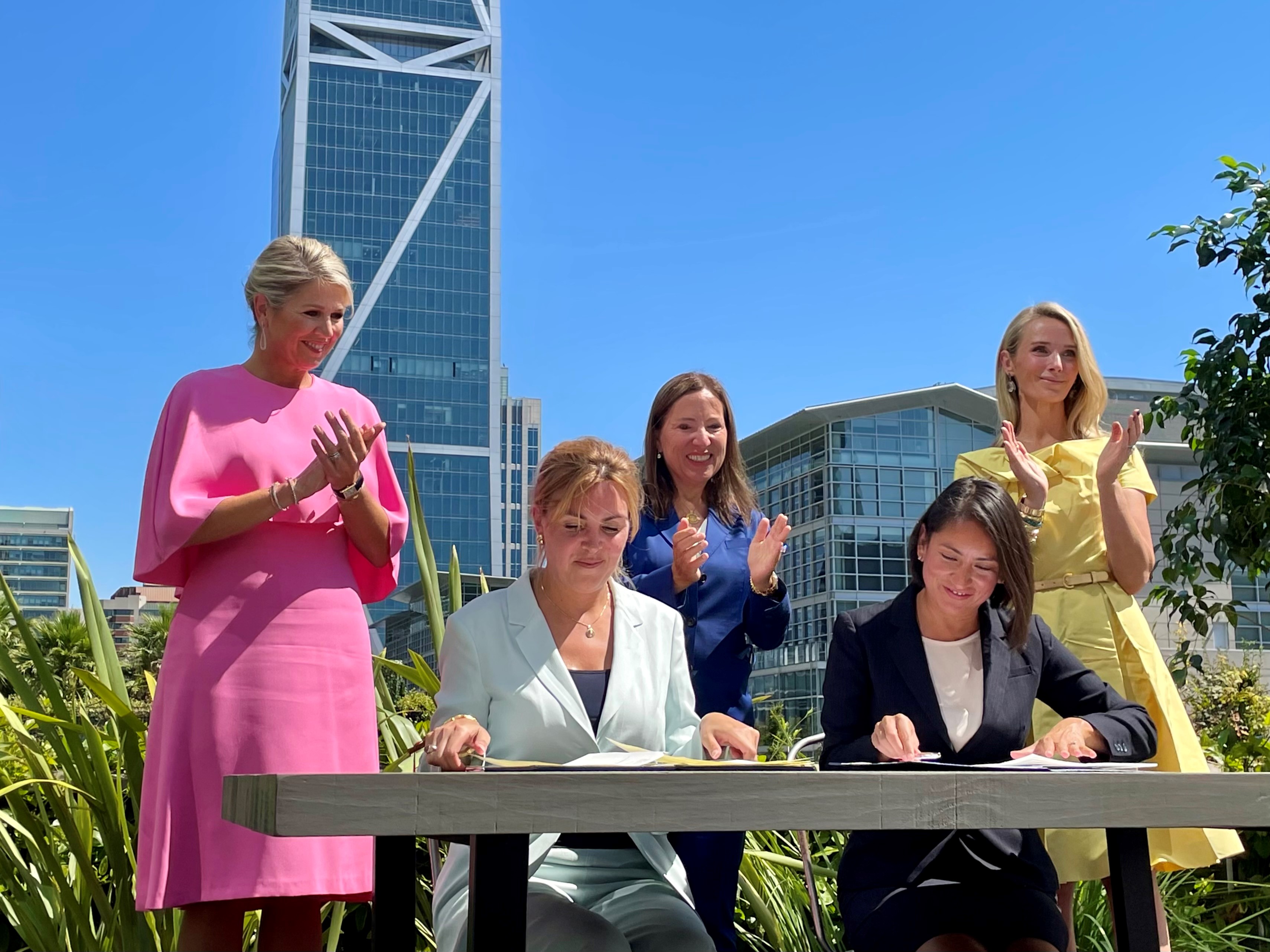 Memorandum of Understanding (MOU) signed by California and the Netherlands aims to cut pollution,

advance the transition to zero-emission vehicles, and build a sustainable economy

“When it comes to climate action, California punches above our weight. We’re working with countries around the world to cut pollution and usher in a new era of zero-emission vehicles. California and the Netherlands are proud to stand side by side in our collective efforts to advance bold climate policies and protect communities from Alameda to Amsterdam,” said Lieutenant Governor Eleni Kounalakis.

“The partnership between California and the Netherlands has come at a critical moment for us as a global community,” said First Partner Jennifer Siebel Newsom. “We may not be able to undo all of the harms that have been done to our planet, but we can make better, climate smart decisions going forward. That’s what this MOU with the Netherlands is about, and our hope is that it will also serve as a model, demonstrating that when it comes to protecting our communities, our planet, and our future, no one state, or nation can or should lead in a silo. We are stronger together.” “California and the Netherlands share high ambitions on climate, working closely together for over 10 years as frontrunners. Recent years have demonstrated that we are increasingly being faced with global crises. Only by working together can we overcome these challenges effectively,” said Her Majesty Queen Máxima of the Netherlands said at the MOU signing.

“Today, the entire West is in the grips of what may be the hottest and longest September heat wave ever recorded, exacerbating wildfires and drought,” said Secretary for Environmental Protection Yana Garcia. “This is just the latest reminder of how real the climate crisis is, and how it is impacting the everyday lives of Californians and people around the world. Today, with our partners from the Netherlands, we are doubling down on our commitment to building resilience to this new reality and prioritizing the protection of our most vulnerable communities. We’re making the most aggressive push on climate this state has ever seen, because what we do today will be felt for generations – and the impact will spread far beyond our borders.”

“The Netherlands and California are both leaders when it comes to climate action. As the decisions by California and Europe to ban fossil-fuel cars show, green mobility will be key in reaching our climate goals,” said Dutch Minister for the Environment Vivianne Heijnen. “This partnership will connect our expertise on charging infrastructure, so e-mobility will be easy, affordable, and accessible for all on both sides of the Atlantic. I’m looking forward to working together with California and Governor Newsom on expanding our collaboration to work towards a clean future for our children.”

Following the MOU signing ceremony, Lieutenant Governor Kounalakis and First Partner Siebel Newsom accompanied Her Majesty to meetings with business leaders from the Netherlands and California. The group spoke of shared economic ties and the role of the private sector in bringing the necessary innovation, investments, and commitments that will be critical to solving the climate crisis.

The partnership with the Netherlands is the latest in a series of similar climate agreements stretching from Canada to China.

Earlier this year, California signed Memorandums of Cooperation with both Canada and New Zealand to tackle the climate crisis. Those agreements followed a Memorandum of Cooperation with Japan signed in March to advance cooperation on climate and clean energy priorities and strengthen trade relations. Governor Newsom also signed a Memorandum of Understanding with China to accelerate ongoing initiatives to protect the environment, reduce carbon and air pollution, and promote clean technology development.

In 2019, Governor Gavin Newsom designated Lieutenant Governor Kounalakis as his Representative for International Affairs and Trade Development, and as Chair of the corresponding Interagency Committee that oversees the state’s trade, investment, and international relations.

California’s world-leading climate policies have led the state to exceed its 2020 climate target four years ahead of schedule and created partnerships across the U.S. and around the world. California has committed a record $53.9 billion to tackle pollution, build climate-resilient water supplies, reduce the risk of catastrophic wildfires, accelerate clean energy solutions, and protect communities from extreme heat.

California’s ZEV market is leading the nation in every category. The state is ending the sale of new gas cars by 2035, reducing demand for oil and spurring partnerships across the nation and around the world. Responding to the Governor’s nature-based solutions executive order, which identified California’s lands as a critical yet underutilized sector in the fight against climate change, California last month released the Pathways to 30×30: Accelerating Conservation of California’s Nature strategy and Natural and Working Lands Climate Smart Strategy.

View a copy of the Memorandum of Understanding signed today.