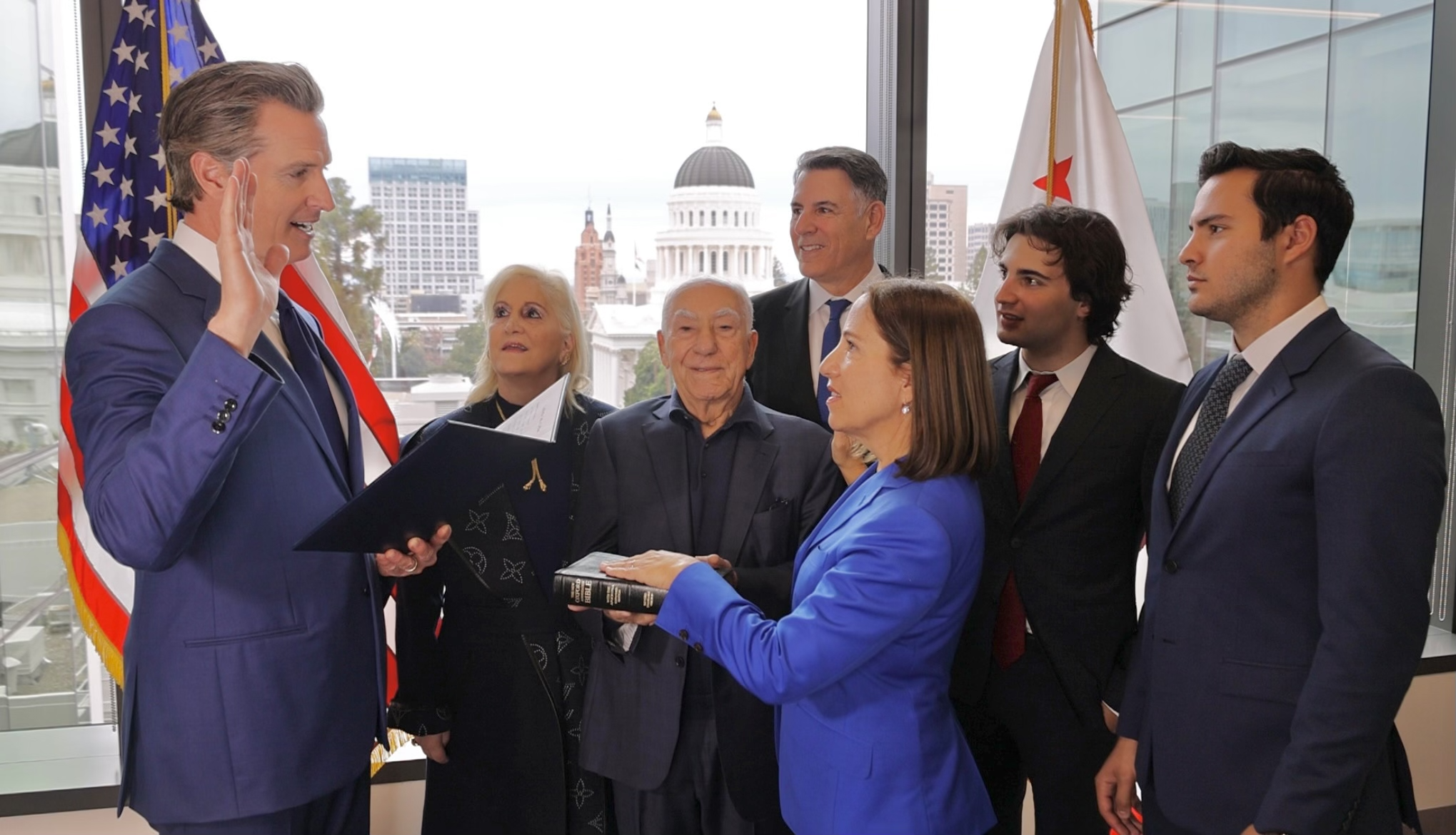 “It is a great honor to serve as California’s Lieutenant Governor, and I am proud to begin my second term working on behalf of all the people of our great state,” said Lieutenant Governor Kounalakis. “Four years ago, we broke a glass ceiling when I was elected the first woman to serve in this position, and I look forward to continuing our work advancing equity and prosperity for our people, expanding access to educational opportunities, and leading in the fight against climate change.”

In a small private ceremony, Kounalakis was surrounded by her husband Markos, their sons Neo and Eon, and members of their extended family. Kounalakis’ father, Angelo Tsakopoulos K. held the family bible.

After swearing in, Governor Newsom noted that because of their “collaborative partnership” together, they’ve been able to “reinvent the relationship between a Governor and a Lieutenant Governor.”

Under California’s Constitution, Lieutenant Governor Kounalakis serves as Acting Governor when the Governor is absent from the state, and automatically becomes Governor if a vacancy occurs in the Office of Governor. She is also President of the Senate and votes in case of a tie.

In February 2019, Governor Newsom signed an executive order designating Lieutenant Governor Kounalakis as his top representative for International Affairs and Trade Development and redesignated her in this role in December 2022 after her re-election. The executive order creates the International Affairs and Trade Development Interagency Committee under Lieutenant Governor Kounalakis, a former United States Ambassador, who serves as Chair of the committee.

As Lieutenant Governor, Kounalakis also serves as chair of the three-member State Lands Commission, which oversees the control and leasing of millions of acres of state-owned land, including offshore oil resources, as well as use and permitting for all navigable waterways in California. She also serves as a member of the California Ocean Protection Council and the California Coastal Commission.

Kounalakis, 56 is the daughter of a Greek immigrant. She is the former U.S. Ambassador to Hungary, appointed by President Barack Obama in 2010. She worked 18 years in the housing industry as president of AKT Development Corporation, and is a long-time Democratic activist, playing key roles in several recent presidential campaigns. In addition, Kounalakis served on the First 5 California Commission.

Eleni Kounalakis graduated from Dartmouth College in 1989, and earned her MBA from UC Berkeley’s Haas School of Business in 1992. She also holds an Honorary Doctorate of Laws from the American College of Greece. She lives in San Francisco with her husband, journalist Markos Kounalakis,.They have two sons Eon and Neo.